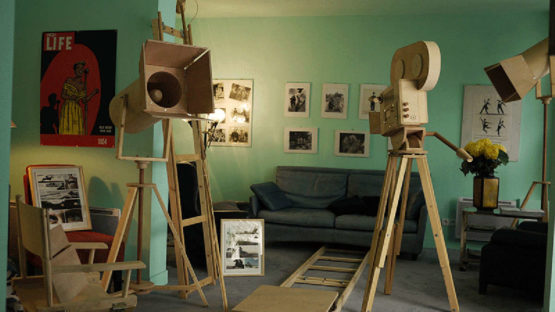 François Nouguiès was born in 1969 in Montpellier. He lives and works in Sofia, Bulgaria.

Artist and film-maker, his videos are linked to performances and more exactly to the realization of social experiences. His plastic research is articulated around new interpretations of known pictures or movies: it aims at questioning the spectator about his own investment in the creation.

The performance “Dancing Killing”, in the centre of his demarch, stages the participants of a dance competition with the winners gain the principal roles in a movie. Ironic situation, because the participants are already actors in the movie of the current performance. In “Last Movie II” a reference to the eponym movie of Dennis Hopper (1971), François Nouguiès realizes a poster and false shooting instruments in wood. Objects are lying, useless in their first function, they are nevertheless the accessories of a movie, a stage, a story. The ideas of artifice and remake are recurrent in François Nouguiès’s works, he plays to replace the spectator in the centre of the reflection and of the action..