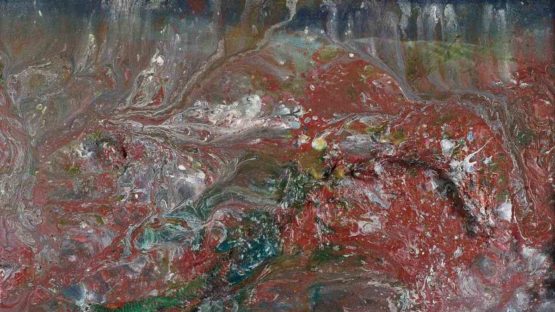 Throughout his career, Richard Sheridan Franklin Bowling OBE RA LG, better known as Frank Bowling, pushed the possibilities of painting through a sensual use of color and bold experimentation. His distinct painting practice has been defined by an integration of autobiography and postcolonial geopolitics into abstraction.

Born in Bartica, Guyana, Bowling moved to England in1950, at the age of 19, where he lived with an uncle and completed his education. He first studied at the Chelsea School of Art, and then in 1959 won a scholarship to London’s Royal College of Art, alongside artists such as David Hockney, Derek Boshier, Allen Jones, R. B. Kitaj and Peter Phillips. There, he graduated with a silver medal.

His work evolved from figurative pop art to huge abstract canvases with colors and textures that draw the viewer in. Tirelessly exploring the material of paint, he continuously invented new techniques that pushed the medium to its limits. His visionary approach fuses abstraction with personal memories. Being a black artist in Britain, Bowling only really began to get the recognition he deserved when his paintings were included in a group show during the 2003 Venice Biennale. In 2019, his first major retrospective was held at Tate Britain, a first for a black British artist.