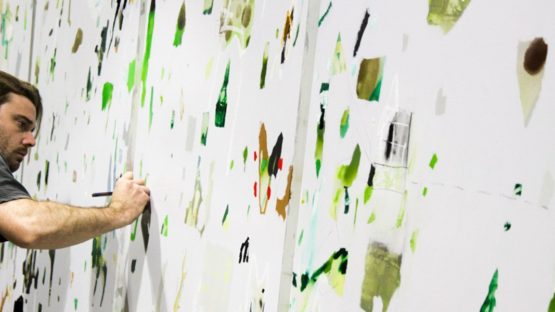 Fred Fowler is a Melbourne based contemporary artist with a background in street art and graffiti, specialized in painting, drawing, bronze sculpture and printmaking.

Fowler was born in 1980 in Canberra, Australia. Inspired by the graffiti he saw around him in Melbourne, Fred started experimenting with tagging in his local neighborhood, at the age of 11. He began creating throw-ups and pieces under various aliases, and at 16, Fred was given the name NUROCK by his graffiti mentor, DUET. From this point on, with the name NUROCK, he began to paint regularly, on train lines and public wall. His intricate large-scale street pieces, confronting and artistic, earned him a status of a legend in Australia’s sub-cultural life.

After living in Paris and travelling throughout Europe for a year, Fred returned to Melbourne and completed a Master of Contemporary Art at the Victorian College of the Arts, graduating in 2011. Fred’s areas of interest while studying at VCA were painting, etching and sculpture, specially the lost wax method of casting bronze sculptures.

In 2001, at age 21, Fowler held his first solo exhibition Raiders of the Lost Art at A.R.T. Gallery Eden in Melbourne. His exhibition included stencils, paintings and rock carvings. His second solo exhibition Highland Chamber at Until Never gallery in Hosier Lane, consisted five silkscreen prints, praised by gallery’s reviewers as ‘a suite of fastidiously elegant black and white ink drawings.’

Culmination of Fred’s work completed over the period of four years was his third solo exhibition Decorating the Apocalypse, a playful investigation of themes related to cultural identity. Images of masks and faces function as the primary signifiers in Fowler’ work. Through sculpture, painting and printmaking, he is questioning the ‘mythologies’ or artificial constructs surrounding issues of identity. Cheap, plastic, Chinese-manufactured toys are sourced locally before being deconstructed and re-configured, to finally emerge, through the ancient process of casting, as intricate, bronze masks. Kitsch wooden ‘primitive’ masks, found in flea markets in Paris and Melbourne, are methodically vandalized, painted and re-presented as cultural artifacts of contemporary society. He exhibited acrylic paintings and a suite of bronze masks – commercial iconography clashed with graffiti tribalism.

His latest works, featured in an exhibition named New Landscapes, consist of a series of oil paintings that use the vehicle of landscape painting to explore the relationship between native and invasive species, analogous to the effect of colonization on the indigenous population of Australia.

Fowler’s work is held in the National Gallery of Australia collection, as well as various private collections in Australia and overseas. He lives and works in Melbourne, Victoria.