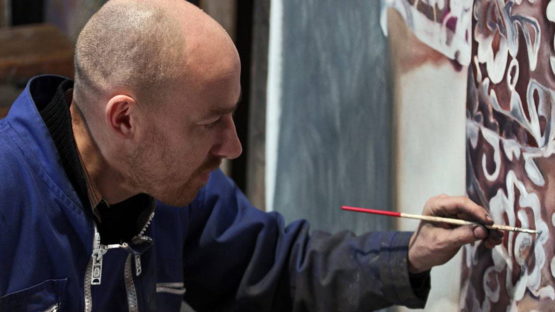 Gaël Davrinche is a French artist whose interest foremost is with a “uneducated” expression style that is spontaneous, without any tricks, and a borrowed representation style of children.  Born in 1971 in Saint Mandé, Davrinche graduated from the Beaux Arts of Paris in 2000.

Early on, he seeks to revise and reinterpret the works of grand masters, an expression between irreverence and tribute.  Las Meninas by Velasquez, Girl with pearl earring by Vermeer, the artists pushes the boldness in taking the Mona Lisa by Leonardo Da Vinci through a series of seven canvases which desecrated Mona Lisa to scrawling point with the accompany words such as “SALE” or worse L.C.K.C.I.R., a nod of the hat that claimed to Marcel Duchamp.  The artist explained, “By reworking these famous works, I am able to release myself from the subject, in order to not override the painting, to let itself play and treating it equally as a medium. Question of reincarnating the space andtimes that then post.”

Through the decisive gesture of painting, Gaël Davrinche questions the portrait in its historical and social signification, its reality and imaginary.  Oscillating between being and appearance, the artist combines the surprise accessories of the figures, the boxing gloves or reversed potted peony, and offer as well an interpretation of a incongruous portrait. His works takes a strange turn that destabilizes us with the ubiquity of the object, furthermore, become an interrogation of his individual role on his attitude, his relationship with the world, and others.

The painting of Gaël Davrinche is powerful. By cutting and scribbling, he gives subject.  According to Philippe Piguet, in his mixed universe “the beautiful, the ugly, paint good, paint bad, the stander, the consensus.” It is all “madness in painting” which invited us to an astonishing visual discovery.

“From Manet through to the present day, many are the artists who, at a given moment – or moments – in their career, have invoked past masters in this way. It is all about both measuring themselves and engaging a dialogue between one period and another, free of stylistic considerations. This allusive practice, found frequently in Picasso’s work throughout his career, means that artists need no longer worry about new subjects and can instead take apart the constituents of the reference work and recompose them into a new image. It is a way of operating in the mode of “nothing is created, nothing is lost, everything is transformed”.If there was a time when Gaël Davrinche was busy developing a whole set of weird, busy little figures that he dashed down on the canvas or paper in a state of excitement that overrode any more elaborate aesthetic concerns, he did so because he hoped that this approach would afford him a space, a freedom.” Philippe Piguet.