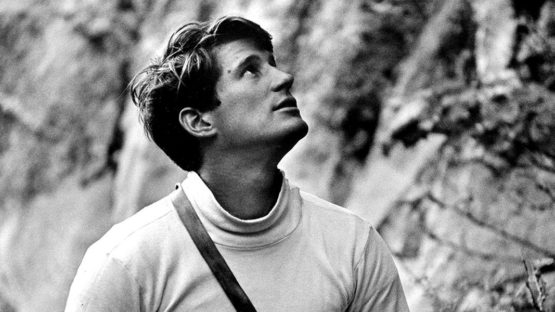 One of the most famous landscape photographers, Galen Rowell was an American climber best known for his mesmerizing shots of mountains. As Yann Arthus-Bertrand has mastered photography from above (aerial) and David Doubilet from below (undersea), Rowell has mastered the mountain photography. With an uncanny ability to capture the ethereal, he sensed and then photographed those fleeting moments that most of the photographers can only dream about. His photos not only impress his viewers’ eyes, the imagery tugs at their very soul. Climbing was Rowell’s life, and his oeuvre has both defined and presented the majesty and mystery of mountains.

Born in Oakland and raised in Berkeley, California, to a college professor and a concert cellist, Galen was introduced to wilderness before he could walk. He began climbing mountains at the age of ten on Sierra Club outings, and at sixteen made his first roped climbs in Yosemite Valley. Over the next fifteen years, he logged more than a hundred first ascents of new routes there and in the High Sierra backcountry. Rowell dropped out of college at Berkeley and worked instead as a mechanic to fund his climbing.[1] Taking photographs began as a way to share his high and wild world with friends and family. In 1972 he became a full-time photographer after selling his small automotive business. Less than a year later he did his first major magazine assignment – a cover story for National Geographic. In 1984 he received the Ansel Adams Award for his contributions to the art of wilderness photography. In 1992 Galen received a National Science Foundation Artists and Writers Grant to photograph Antarctica. Rowell eventually visited all seven continents, producing a substantial portfolio reproduced in articles and books of both polar regions, the Himalayas – in particular Tibet – and South America. In the last twenty years of his life, Galen made over thirty-five journeys to the mountains of Nepal, India, Pakistan, China, Tibet, Africa, Alaska, Canada, Siberia, New Zealand, Norway, and Patagonia. Besides participating in major expeditions to Mount Everest, K2 and Gasherbrum II (not to the summit), he made the first one-day ascents of Mount McKinley in Alaska and Mount Kilimanjaro in Africa as well as first ascents of Himalayan peaks such as Cholatse and the Great Trango Tower. He also made the highest complete ascent and descent of a mountain on skis on Mustagh Ata (24,757 feet), as well as a 285-mile winter traverse of the Karakoram Himalaya.

In 2001, after numerous successful climbs and photographs taken, and just a year before his tragic death, Galen Rowell formulated his Artist Statement, where he explained his approach to climbing, photography, and life in general. This is an excerpt taken from that statement: “My interest in photography did not begin with a burning desire to see the world through a camera. It evolved through an intense devotion to wilderness that eventually shaped all parts of my life and brought them together. I began to express this devotion in a physical way through climbing and hiking, and in words through lectures and articles. Photography was a means of visual expression to communicate what I had seen to people who weren’t there. At first I was disturbed that 99 percent of my images didn’t look as good as what I had seen. The other one percent, however, contained some element–a beam of light, a texture, a reflection–that looked more powerful on film than to my eye. Without this I never would have been drawn toward photography as a career. I became fascinated with trying to consistently combine photographic vision and a visualization in my mind’s eye to make images that exceeded the normal perception before my eyes. Although I plan to continue traveling to and photographing exotic places indefinitely, I have a confession to make. I’ve known all along that more of what I am seeking in the wilds is right here in my home state of California than anywhere else on earth. But there’s a ‘Catch-22.’ I couldn’t say it with authority until I had all those journeys to Tibet, Nepal, Pakistan, China, South America, Antarctica, and Alaska behind me.”[2]

Simple Viewing Is Not The Same As Participating

Galen Rowell pioneered a special brand of participatory wilderness photography in which the photographer transcends being a simple observer with a camera to become an active participant in the image being photographed. His emotional connection to his subject matter came across clearly in his early mountain climbing photographs that first drew public recognition, but his landscape imagery, often made on the same adventures, has proven even more evocative because of the visual power he created from what he described as “a continuing pursuit in which the art becomes the adventure, and vice-versa.” No scene was taken for granted; the principles of action photography were applied to his landscapes and vice versa. His favorite landscapes feature an unexpected convergence of light and form, seemingly unrepeatable moments captured by combining imagination and action with a clear understanding of outdoor optical phenomena. The photographer called these images “dynamic landscapes” and his quest for them is documented in his bestselling 1986 book, Mountain Light: In Search of the Dynamic Landscape.[3] When not doing assignments for Life, National Geographic, Outdoor Photographer, or other publications, Rowell was likely to be found either writing at his Bishop home, climbing in the High Sierra, working at Mountain Light Gallery or hiking and photographing with his wife Barbara. The writing was also a big part of his life. Having realized early in his career that unless he writes his own words, his message was going to be invariably altered or, at best, weakened, Rowell would spend at least the same amount of time writing as he would photographing, if not more. The main reason he kept writing is that his most powerful messages about the fates of wild places that he cared about needed to have both words and images.

On August 11, 2002, returning from a photography workshop in Alaska, Galen Rowell and his wife Barbara Cushman Rowell, along with pilot Tom Reid and his friend Carol McAffee, tragically died when their plane crashed near Eastern Sierra Regional Airport in Bishop, California. Galen Rowell would be remembered as one of the greatest landscape photographers, an accomplished climber, and a successful writer, always generous with information. His messages, whether coming from his photographs or his words, whether they are technical, artistic, or even philosophical, provide more than a simple instruction to photography – they are a way to approach life itself.