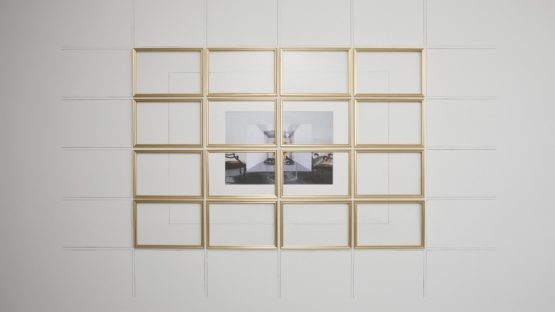 Giulio Paolini, born in 1940, is an Italian artist, associated with both Arte Povera and Conceptual Art. He started as a graphic designer, but would go on to work in sculpture, painting, and later, photography and collage. His early works reacted against his perception of the beauty of Art Informel, and focused instead on the material and formal components of painting, like the canvas and the frame. He was known at times to eschew the use of paint in favor of bare surfaces. Starting in the 1970s, his works became more conceptual, focused on the systems of creating and exhibiting art. Paolini also designed sets and costumes for theater, notably for director Carlo Quartucci, as well as Frederico Tiezzi’s versions of Richard Wagner’s operas.