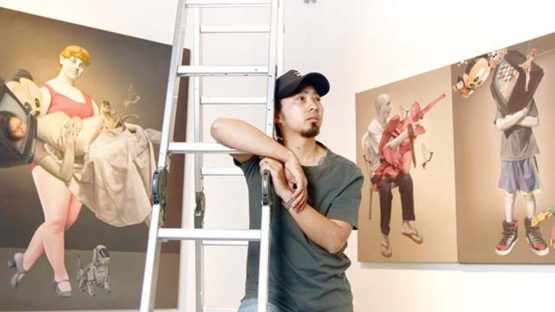 Guerrero Z. Habulan is a figurative artist born in Philippines. A young social realist with a sharp sense of humor, Habulan intentionally lightens the load off the sordid truth, mapping the realities of tradition and progress into a symposium of delightful color, fantasy and reality. The artist, using an incredible natural talent and artistic technique, diverts from the militancy of the earlier generation, and opts for a whimsical tone while he retains a sotto voce critique of the present times.

Guerrero was born in 1980, in Malate, Manila. As the son of celebrated and distinguished artist Renato Habulan, one of the staunchest social realists of the 70s, his love for the arts seemed inevitable. He grew up surrounded by his artist father’s colorful artistic life – visiting artists’ studios whilst mingling with creative minds. Guerrero learned to draw instinctively, well before undertaking formal training. He recalls his early exposure with the dreamy romanticism that molded his sincere and utmost appreciation for the arts.

The artist acquired a degree in Fine Arts in Visual Communications at the University of the Philippines in Diliman, Quezon City, concurrently winning several awards whilst a student. Habulan continues to be supported under the patronage of Dr. Cuanang, one of Manila’s most foremost art patrons and collectors. He is also a member of the popular art collective Sianviaje of Antipolo City, Rizal, Philippines.

Guerrero Habulan has long been drawn to unlikely unions. The brilliance that overflows from his lyrical creations is a result of this very inclination. Guerrero does not only look at what an object is, he looks at what it is not and thus gains a more refined understanding of reality. His habit of looking at opposing ideas allows him to unravel and draw out another dimension of his object of inquiry, which he later employs to be part of a much greater whole. Just as a word finds more meaning once it is part of a sentence, Guerrero makes a story out of a solitary object by combining it with unexpected partners.
‘Juxtaposing figures and elements, that’s something I always play with,’ Guerrero admits. ‘My concept, even though it is socially relevant and has social context, it is not heavy. It’s more of satirical realism.’

One of the paths that the young artists took was to ride the wave of pop art and the media in a loosening of the tensions that came before. In his recent work, the human characters or near semblances of such, still provide the bases of his narrative. But, on the other hand, they are virtually overwhelmed by all sorts of media characters, comic figures from way back, such as the ubiquitous Mickey Mouse, classical figures of faux marble making heroic gestures, children’s toys, robots, birds, and animals of various stripes.