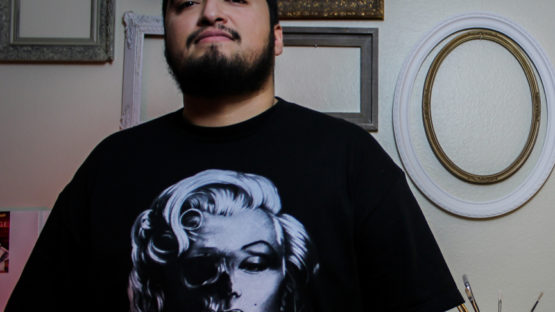 Born in Torreon, Mexico in 1981, Gustavo Rimada was the youngest of four. Rimada’s memories of Mexico are few but of those he does remember he was constantly drawing. Whenever, wherever. His mother reminded him of his gift all the time as Gustavo grew up. Always encouraging him and enabling him. She knew before Gustavo Rimada did what his true passion would become.

By the age of seven his parents decided to move to California. Leaving behind their, what Rimada calls “Cosby Show” life. His father was a lawyer,  mother a doctor. Upon arriving, there employment changed drastically. Now they were washing dishes and housekeeping. Their lives had been flipped upside down. They were tough times but with that Rimada saw the strength his parents put up and it is something he keep close to him.

Rimada’s parents chose Indio, California to raise them. Throughout school he took art classes, it came easy. After graduating from high school, Rimada decided (with the help of family) to move to Santa Monica and attend The Art Institute where he chose to study Computer Animation. While in school 9/11 hit. After that happened it left Rimada feeling inadequate in his life.

He needed something more, Rimada’s heart wasn’t in animation nor school anymore. While walking past an Army Recruitment Office and without any hesitation he went in and sat down. A few hours later Gustavo was signed up and to be leaving for boot camp within weeks.

He spent 3 years in the Army. Within that time art took a backseat. Dabbling here and there but nothing serious. It really wasn’t until about 2 years after the Army that Rimada was given two huge pieces of MDO board to paint on. It was truly the beginning of his journey back into art.

Rimada’s heart and hand took over. He sketched, he painted till late in the night. Painting on everything from shoes to bags. Within a month Rimada filled a sketchbook full of Elvgren pinups and Olivia paintings. Soon after all that work, he started working at a tattoo shop. The tattoo world inspired Rimada’s artwork a whole new life and passion. The knowledge and history of the industry was incredible to him.

Rimada have now become what you might say, a workaholic and he loves what he do. Wouldn’t trade it for anything. Rimada truly eat, breath and sleep art. He work hard and will continue to do so whatever it may be.

Last but not least Gustavo is a devoted father, husband and family man but non the less a passionate artist.