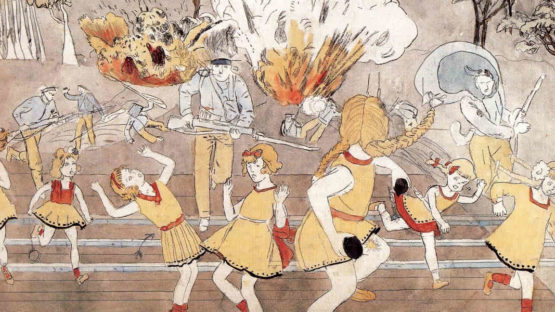 The centerpiece of what may very well be one of the most remarkable and terrifying stories emerging from the art world of the last century, Henry Darger was an American self-taught artist who led a solitary and reclusive life as a janitor in a Chicago hospital. Little did people around him know that the man in charge of keeping the hospital hallways clean was also the secretive owner of an incredible talent hidden far from plain sight. Unfortunately, it was not until after his death that his unique and charming artistic productions were discovered.[1] Taking most of his cues from the styles and compositions of medieval manuscripts and similar written works, Darger created countless paintings, collages and drawings that tackled topics such as innocence, slavery, destruction and the ultimate triumph of good over evil. And he did all that in complete privacy whilst the world had no idea what was going on behind closed doors.

Darger was born during the year of 1892 in Chicago, Illinois. As the Cook County records show, he was born at a home located at 350 W. 24th Street to parents named Henry Darger Sr. and Rosa Fullman. When Darger was about four years of age, his mother died from complications following a puerperal fever after giving birth to a daughter – a child that was subsequently given up for adoption, meaning that her brother spent the rest of his life without ever knowing his sister. John M. MacGregor, a well-respected art historian and psychologist who dedicated much of his career to collecting information in order to make an accurate biography of Darger, claimed that Henry had two other siblings that were born before him, none of the two he ever met. Despite such a dire family situation, Henry’s father was kind and optimistic, supporting his son in any way possible. Unfortunately, this all changed in 1900 when crippled Darger Sr. was taken to St. Augustine’s Catholic Mission home and his son was placed in a Catholic boys’ home[2]. Henry’s father died in the year of 1905, an event which resulted in his son being institutionalized in the Illinois Asylum for Feeble-Minded Children in Lincoln, Illinois. The only official diagnosis the doctors managed to establish was that little Henry’s heart is not in the right place. However, according to the aforementioned John M. MacGregor and his discoveries, the true diagnosis was actually self-abuse.

Young Darger himself felt that much of his problem was being able to see through adult lies, an ability that he developed from a very early age. It did not allow him to have a normal, worry-free childhood that would serve him much better in the long run as far as mental health is concerned. Additionally, Henry was also rigorously disciplined by teachers and ganged up on by classmates. He went through a long phase of feeling compelled to make strange noises as well, a mysterious illness that may have been a result of a Tourette Syndrome. Notorious within the city’s limits, The Lincoln asylum’s practices included forced labor and severe punishments to the individuals who sought their help, meaning that Darger was exposed to even more problems instead of working on the primary issues. All of these horrible factors culminated in Darger’s writings, an interesting read that offers a small window into observing the terrible circumstances of this artist’s early life.[3] It should be noted that these writings also reveal that Henry had nice times and friends in the hospital as well. A series of attempted escapes from the asylum finally ended successfully in the year of 1908. The traumatized 16-year-old returned to Chicago and, with the help of his godmother who he did not saw for years at that point[4], found employment in a Catholic hospital where Darger worked as a janitor until his retirement in the year of 1963.

Finding a Secret Escape in Art

Except for a brief stint he did in the army during the dire circumstances of WWI, Henry’s life took on a pattern from the time he was sixteen years old[5], a pattern that seems to have varied little as he was getting older. He worked as a janitor, attended church Mass daily and collected an incredible amount of trash from the street[6]. To outsiders, he seemed distant and strange as Darger lived in his own private universe that no one understood but him. His only close friend was a man called William Schloeder. Since Schloeder was also a neglected child himself, the two troubled men wanted to found a Children’s Protective Society that would put such children up for adoption to loving families. However, before such a plan could be put in motion, William left Chicago sometime in the mid-1930s. The friends stayed in touch through letters until Schloeder’s death in 1959. There are some speculations that suggest the two had a romantic relationship, but these theories are not based on any solid proof. In 1930, Darger settled into a second-floor room on Chicago’s North Side at 851 W. Webster Avenue in the Lincoln Park section of the city, a room that will be his sanctuary for the next 43 years. It was within these few walls that Darger wrote his massive tomes and created unique artworks that were inspired by the medieval way of forming manuscripts. The visual subject matter of these works ranged from idyllic scenes in various interiors and tranquil landscapes populated by children and fantastic creatures of all kinds and sorts. However, many pieces were much darker in tone as Darger often painted scenes that depicted terror and carnage, going as far as presenting young children being tortured and massacred[7].

As far as Henry Darger was concerned, the unique artworks and extensive journals were the only means of escaping from the harsh realities of life

The Bitter End to a Sad Tale

Besides holding a job of a janitor, all Darger was doing in his life was creating art and writing. Much of these artworks were paintings or drawings that can be best described as mixed media as they had many collage elements added to them. He kept everything he painted a secret as not a living soul knew what Henry was up to behind closed doors. This remained the case until the time of his death in the April of 1973. Henry died in the rooms of the St. Augustine’s Catholic Mission home, the same institution in which his father had died many decades earlier. The last entry in his diary stated the following: January 1, 1971. I had a very poor nothing like Christmas. Never had a good Christmas all my life, nor a good new year, and now… I am very bitter but fortunately not revengeful, though I feel should be how I am… Darger was buried in All Saints Cemetery in Des Plaines, Illinois, and his tombstone was inscribed with the words of Artist and Protector of Children. Luckily, his art was discovered posthumously and it is now considered to be one of the most celebrated examples of outsider art ever made[8].

The Scary Perspective of Darger’s Situation

It’s oftentimes quite scary to think just how many more talented individuals such as Darger there are out there, hidden from the world that would rejoice if it saw their art. For what it’s worth, Darger’s work was discovered after he met his demise, allowing the scene to retroactively enjoy his work despite the author never being aware of just how popular and recognized his creations managed to become. But it’s frightening to think how many other artworks are sitting in a drawer somewhere, waiting to be discovered and be given a chance to mesmerize the audience – a chance that will probably never come to be. Luckily, the art of Henry does not have to worry about such a future. His work is now safe and secure, it’s legacy cemented and the name of Darger will go down in history as one of the most surprisingly talented individuals of the modern era. However, we should never forget just how easily things could have gone the other way.[1]