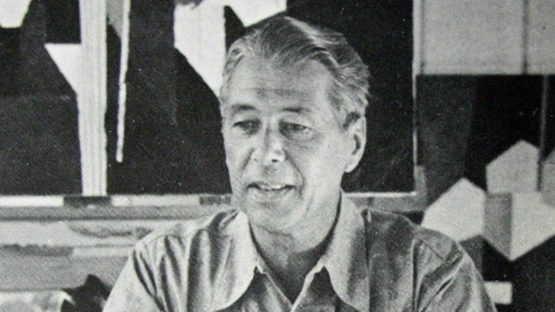 Famous for being a designer, painter, typographer, and an architect, Herbert Bayer was one of Bauhaus’ last students. And one of the most creative individuals that every walked the face of Earth. In the time he had spent at the school, first as a student, a later as a teacher, he created the amount of work many struggle to produce in their entire lifetimes. After the rise of the Nazi Germany, like many of his contemporaries, Bayer left the country and went to the United States, where he continued to work. Besides his own pieces, his legacy includes the Atlantic Richfield Company’s art collection, which was, at the time, the world’s largest corporate art collection.[1]

Herbert Bayer and the Bauhaus

He was born in Haag, Austria. At the age of nineteen, Bayer became an apprentice to the architect and designer Georg Schmidthamer in Linz, where he first started working as a typographer. In 1921, he went to Darmstadt and worked as assistant to the architect Josef Emmanuel Margold.[2] While he was there, Bayer discovered Gropius’ Bauhaus Manifesto and was very intrigued by it. The same year he enrolled at the Weimar Bauhaus, where he had the pleasure and privilege of studying under such masters as Wassily Kandinsky and Paul Klee.[3] Four years later, Bayer completed his studies at the Bauhaus, and decided to stay on as one of its most prominent faculty members, and as a head of printing and advertising department, appointed by Walter Gropius. Adopting the principles of reductive minimalism, Bayer developed a Sans-serif type called Universal, which helped in defining the Bauhaus aesthetic.[4] In 1928, the artist moved to Berlin and established a successful graphic design firm. He even worked as the art director of German Vogue. However, he was feeling increasingly uncomfortable due to the rise of the Nazi party and their oppressing government. Yet, he stayed in the country far longer than some of his fellow artists. In 1936, he designed the brochure for the Deutschland Ausstellung, which was an exhibition meant for the tourists in Berlin during the Olympic Games. His works were also included in the Nazi-organized Degenerate Art exhibition in 1937, and that was the straw that broke the camel’s back, forcing him to finally leave Germany.

Life and Career in the USA

Upon leaving Germany, Bayer spent some time traveling Italy before settling in New York in 1938, where he organized the exhibition Bauhaus 1919-1928 at the New York Museum of Modern Art in the same year. Without any political or ideological restrictions, his career bloomed. Aside from distinctive advertising jobs, he became a consultant art director for J. Walter Thompson and art director of Dorland International, after which he developed a long-lasting association with the Container Corporation of America, producing some of the most innovative and widely applauded print ads of the time. [5] Hired by a visionary and industrialist Walter Paepcke, Bayer moved to Colorado in 1946 to work, among others, on the promotion of skiing. His promotional posters helped the viewers in identifying skiing with exciting and glamorous times, turning Aspen into one of the most popular destinations for skiers. Continuing his typography, Bayer designed his phonetic alphabet for English in 1959. A sans-serif without capital letters, it had special symbols for the endings -ed, -ory, -ing, and -ion, as well as the digraphs “ch”, “sh”, and “ng”. He also co-designed the Aspen Institute and restored the Wheeler Opera House. The artist met an oilman and businessman Robert O. Anderson when the latter noticed Bayer’s modern house of his own design and went over to introduce himself. It was the beginning of a lifetime friendship and business association that resulted in the world’s greatest art collection at the time. Anderson formed Atlantic Richfield Company, and Bayer created the company’s logo and all of the related corporate branding. He was in charge of overseeing acquisitions for ARCO Plaza, the new headquarters, and he designed Double Ascension, a sculpture-fountain placed between the dark green granite towers.

Bayer was one of the most versatile artists of his time

Herbert Bayer will be remembered as one of the most creative individuals, whose works in various fields were widely recognized and famous. He designed fonts, buildings, posters. While he was at the Bauhaus, he produced more than some artists create in their lifetimes. He was only 28 years old! And yet, his creative energy and inspiration “forced” him to continue making pieces, and all of them were quite distinctive and innovative. ARCO’s art collection, which was at one point the world’s largest, is also one his accomplishments.

Featured image: Herbert Bayer in his studio – image via mahbubahmedtheory.wordpress.com