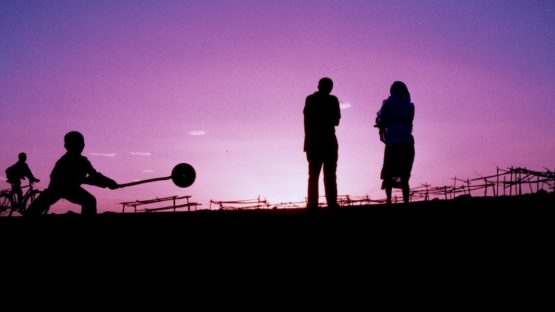 Hervé Saint-Hélier is a French photographer who primarily focuses on individuals and their journeys in his practice.

Self-taught, Hervé Saint-Hélier gained experience working for the Sipa and Sygma agencies as a news photographer. In 1998 Saint-Hélier decided to abandon current events and dedicate himself to more artistic approach, producing realistic, narrative photographs.
Inspired by his journeys around Europe, the United States, and Asia, the artist focuses on the details of everyday life in the places he travels to. His snapshots transport the observer in the most basic and universal experience of men in transit, men who move. Departure lounge, staircases, view of a hotel swimming pool, and taxi abandoning passengers at the corner of a street, are just some of the ordinary details which the artist captures in his pieces.

Vibration of the Light

Equipped with a traditional camera, Hervé Saint-Hélier relentlessly follows the trails of every continent coveting the impending visual phenomena that he senses. Traveling through places such as Siberia, India, Asia, Amazonia, Europe and Ethiopia, among others, the artist focuses his attention on the vibration of the light, whether it is cold and blue, hot and incandescent, natural or artificial, lending a contemplative eye on the world, scrutinizing the reality with a remarkable sense of observation.

“Star lights are my muse. I just reveal what I see… What I photograph is natural, I add no effect. I have a deep envy for seeing something else.” – Hervé Saint-Hélier

The series Voyages Urbains is one Hervé Saint-Hélier’s most symbolic series. It was mainly realized in 1997 to 2001 in Tokyo and New York and was presented by Marlborough Gallery, New York in 2008. Entitled Voyage, it was Saint-Hélier’s first solo exhibition in the U.S.
In 2014 the series Voyages Urbains was presented at the gallery Géraldine Banier in Paris, France.

Hervé Saint-Hélier has participated in numerous joint exhibitions, in London, New York and Paris, amongst other places.
His work is included in many collections, including the Société Générale Collection, Paris, France, and the Carmignac Foundation Museum, Porquerolles, France.