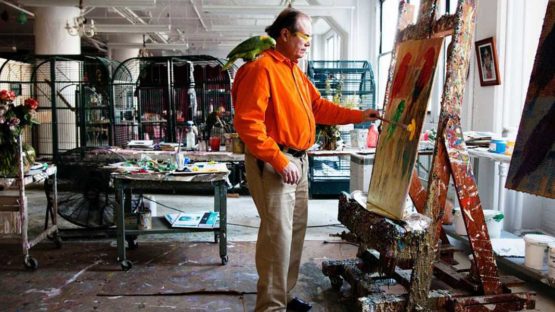 Hunt Slonem is an American painter, sculptor, and print maker. He is best known for his Neo-Expressionist paintings of tropical birds, often based on a personal aviary in which he has been keeping from 30 to over 100 live birds of various species.

Slonem was born in Kittery, Maine. His father was a Navy officer, and mother – a homemaker who spent much of her time doing volunteer work. As a result of his father’s military career, he lived in Hawaii, Virginia, Connecticut, California and Washington State. It was Slonem’s grandfather who always encouraged young Hunt to paint. “I grew up around painting, and my parents dabbled in painting themselves. I was given paints as a child, and I wanted to be a painter from first grade onwards,” Slonem told the online magazine Art Interview.

After completing school, which included living in Nicaragua as an exchange student when he was 16 years old, Slonem commenced undergraduate studies at Vanderbilt University in Nashville, Tennessee. He then spent about six months of his sophomore year at the University of the Americas in San Andrés Cholula, Puebla, Mexico, but later graduated with a Bachelor of Arts degree in Painting and Art History from Tulane University in New Orleans, Louisiana. He also took courses at the reputable Skowhegan School of Painting and Sculpture in Maine, where he was exposed to such influential artists from the New York area as Louise Nevelson, Alex Katz, Alice Neel, Richard Estes, Jack Levine, and Al Held. During that period, Slonem altered the “i” to an “e” in his family name as a nod to numerology. He moved to New York in 1973 to further his art practice, and Manhattan had become his consistent base ever since.

In 1975, he got a call from artist Janet Fish who offered him her studio for the summer. That telephone call turned Slonem’s life around. Shortly afterwards, in 1976, Hunt Slonem received a painting grant from the Elizabeth Greenshields Foundation in Montreal, Canada, and began painting in earnest. His first solo show was held at New York’s Harold Reed Gallery in 1977, followed by a major exhibition at the prestigious Fischbach Gallery. As Slonem’s career progressed, he was introduced to people like Andy Warhol, Liza Minnelli, Sylvia Miles, and Truman Capote. He soon became a habitué of New York’s trendiest hot spots and an active participant in the city’s burgeoning art scene.

Despite living in the heart of Manhattan, Slonem remained true to his boyhood fascination with exotica, which he had developed as a youth in Hawaii and during his time as a foreign exchange student in Managua, Nicaragua. His paintings expressed a strong affinity for nature, especially the various species of exotic butterflies and tropical birds living on the island. He soon became well known for creating grisaille paintings of small birds in their cages. He often painted them wet-on-wet and grit off the surfaces to denote wire enclosures after the birds had been strategically placed.

Birds also fill the surface of his largest project yet – a 6 foot by 86 foot mural he painted for the iconic Bryant Park Grill Restaurant in New York City, completed in 1995.

Hunt Slonem’s oil paintings pivot between the fantastic and the natural. These natural forms ultimately become the subjects for many of his artworks, appearing in large lavishly colored paintings and constructed sculptures. As an artist, he endeavors to explore the many expressive faculties of color. His paintings are layered with thick brushstrokes of vivid color, often cut into in a cross-hatched pattern that adds texture to the overall surface of the painting. Slonem often hides his subjects “behind a grid of incised lines, blurring their contours and emphasizing the paint’s tactile quality.” This surface patterning combines with the rich colors and recognizable subject matter to create paintings that are physically and aesthetically rich.

Another recurring theme of Slonem’s pictorial work is portrait painting, and that of Abraham Lincoln in particular. He is interested in history and memorabilia, and for him, the “larger-than-life” Lincoln is a catchall. Slonem’s portraits of Lincoln feel personal, and in surprising ways, he’s close to the long-deceased.

In the early 1980s, Slonem began working on a new series of so-called “Rabbit paintings.” The idea for this critically acclaimed series came to him after he had discovered that the year of his birth, 1951, was the year of the Rabbit in the Chinese zodiac calendar.

Apart from painting, Slonem is also making sculptures, like the sizable, “Tocos,” an 18-foot acrylic and aluminum tower of toucans exhibited at the Polk Museum of Art in 2012. He has also restored several historic houses. “I consider it part of my art form,” Slonem said.