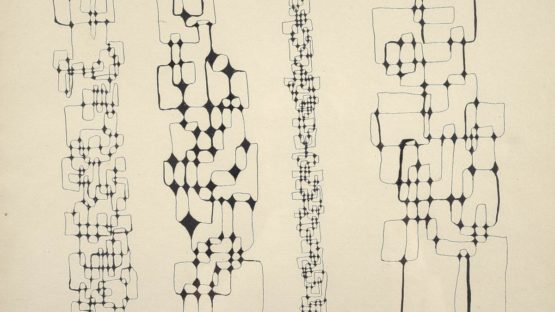 Ibram Lassaw was born in Alexandria, Egypt, then part of the Ottoman Empire, to Russian-Jewish parents. He arrived in New York at the age of eight and became a citizen in 1928. One of the most important influences on his future as a sculptor was The Clay Club founded by Dorothea Denslow at the Brooklyn Children’s Museum. Under her direction, he learned classical sculpture techniques such as clay modeling, and plaster casting, including making full head death masks. In 1927 Lassaw saw the International Exhibition of Modern Art, organized by Katherine Drier and the Société Anonyme, at The Brooklyn Museum. This exhibition had a profound impact on the young Lassaw’s imagination and he later compared it to “Future Shock”. He began a through study of art history and complied a 33 volume encyclopedia of reproduction clippings of the worlds art. He read all the French art magazines and art history books available at the 42nt street public library in order to “own all of art history”.

While he was still in high school, he took night classes at the Beaux-Arts School of Design. He also attended City College of New York for a few semesters, primarily taking art history classes. During the difficult years of the early 1930s Lassaw met other artists who were interested in what was called “advanced art”. He was a founder of the Unemployed Artists association, the Artists Union and in 1935/36 the American Abstract Artists. During the Depression, he worked on the Public Works of Art Project, and taught under The Works Project Administration. He created his first abstract drawing in 1928 and in 1933 his first open space sculpture. From the 1930s to 50’s he exhibited at the Whitney Annual exhibitions, the American Abstract Artist exhibitions and often with The Clay Club, as well as some other galleries. He served in the US Army in WW2. In 1947, he was among the founders of The Club, a loose affiliation of artists who gathered together to talk about art and ideas. In 1951, he was invited to join the Kootz Gallery in New York City and while with Kootz worked on a number of commissions for synagogues, large buildings, and private homes.

Lassaw was sure that the future of sculpture was in open space and materials should be used for its “self- color”. He was an avid reader of philosophy, natural sciences, astronomy and math, and studied Zen Buddhism with D. T. Suzuki at Columbia. Contrapuntal music was also very important to him. As a young man, Lassaw realized that humans are a natural part of a living intelligent universe, an organization of interconnected, interdependent systems. He felt that as an artist he was just doing his part in the continuing creation of the universe. His sculpture reflects this philosophy, which was shared to some degree by a number of his contemporaries. He agreed with art critic Harold Rosenberg who described abstract expressionism as “action painting” and he called his own work, “action sculpture” because it grew without a plan, moment by moment.

The Happiest Sculptor in New York

In his lifetime he never attained the degree of fame that his close friend and neighbor Bill de Kooning did, but he was called, “the happiest sculptor in New York”, by Lawrence Campbell in his article Lassaw makes a sculpture (Art News, March 1954). Lassaw was described as being peaceful, busy, and speculative all day long in his studio high above Sixth Avenue and says his happiness comes “not because his works are finally receiving the attention they deserve, but from inner contentment and joy in his work, not always encountered among artists.” Lassaw’s work is in the permanent collections of a number of museums and private collections around the world, including: The Albright-Knox Art Gallery, Baltimore Museum of Art, Birla Museum, Calcutta India, Carnegie Institute, The Fogg Museum, Israel Museum, Jerusalem, Israel, The Museum of Modern Art, The Newark Museum, The Peggy Guggenheim Collection, Venice Italy, The Whitney Museum of American Art, The Metropolitan Museum, the University of California Museum, Berkeley, California, and others.