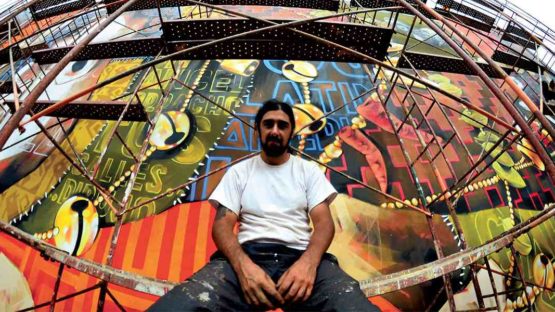 Inti is a Chilean urban artist whose influences stem from Latin American socialist murals and graffiti art. In his work he cites and exploits iconographic elements, color and designs from pre-Columbian traditions, which he combines with the graphic aesthetics of graffiti.

INTI takes his name from the Incan sun god and the Quechua word for ‘the Sun’ as homage to his Chilean roots. He was born in Valparaíso, Chile a city affluent in culture from immigrants travelling through its port, in the early 80’s and began painting his urban environment, walls and streets when he was 14. The origins of his work are inseparable from the cities of Chile, where expressive Latin music, chaotic cityscapes and less bureaucratic city-planning makes vibrant street art thrive. He collaborates with other street artists Hesoe, Fisek, Saile, Lrm, Myre and Rdg1 in a collective called STGO Undercrew which bases itself in the nearby city of Santiago. STGO Undercrew has worked with Adidas, Rip Curl music festival and Maquinaria Festival in Chile.

INTI’s main artistic expressions are murals. They are mainly painted in red, yellow and orange colors. INTI’s figurines are influenced by Latin American fantasy and storytelling as well as Christianity derived from renaissance times. With a warm orange glow, the murals often contain themes of life, death, ancient religion and Christianity, all drawn together with one or two strange characters. The characters are like blending of all things Chilean: the Incans, the tribesmen, the peasants, the Catholics and the revolutionaries but with a strange mutant-like creepiness. There is a strong political edge to many of his pieces. INTI proudly flaunts South America’s rich cultural history in the face of globalised capitalism, whilst still addressing Chile’s problems of poverty and their rocky recent history.
INTI works out of his native Valparaiso, with a unique spectral albino iconography, which he combines with symbols and icons from pre-Colombian cultures to create sophisticated, near-abstract figurative work.

Although the strong sense of Latin culture can be felt with INTI’s paintings, he has become an ambassador of South American street art worldwide. His work can be seen dominating the skyline across walls in Belgium, USA, Slovakia, France, Lebanon, Spain, Germany, Poland, Norway, Turkey, Peru, Puerto Rico and – of course – Chile.