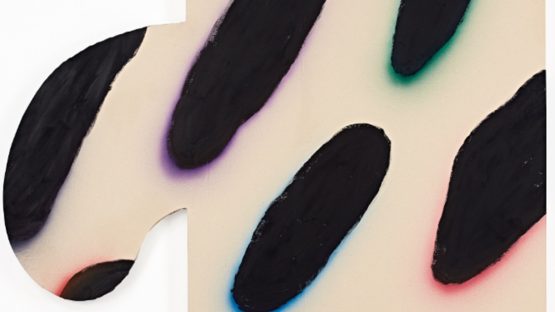 James English Leary is an American artist, whose paintings invoke metaphors that nurse camp-psychological states in the viewer. The artist doesn’t merely paint his paintings, but he constructs them out of painting’s component parts, such as a stretcher, fabric, color, and in that order. It often happens that he utilizes a shaped substrate.

The artist thinks of abstraction as something impossible, even when talked about. James believes that when people talk about the notion of abstraction, what they truly mean is materials that only refer to themselves. He tries to explain how there is no real abstraction per se, but what we refer to as abstraction is that what we project into a painting.

The artist explains how there is no real abstraction

Could it be that the artist is talking about something similar to, for example, a Rorschach test that something is presented to the spectator, and it is only up to him to determent what it is? The representation needs to be completed by the viewer himself, and he is the one who needs to commit to wanting a picture or painting to refer to that which he sees in it. James mentions Jackson Pollock’s paintings, as an example of such art for which the spectator takes responsibility of projecting images onto.

The viewer commits to what he projects onto a painting

His pieces are not like your ordinary painting artworks, they are more like an image-object, with a breezy overture to a new language. The ever-lasting question on how to read a painting is refered to with in humorous way, changing the art experience as we know it. By creating the out-of-this-world shapes, art hinges on the impossiblle, leaving the end result to the viewer’s imagination.

James lives in New York, where he is working as an artist and a filmmaker, currently teaching as an adjunct professor at The Cooper Union School of Art. His art is acknowledged and appreciated all around the world, recognized by the Tiffany Foundation Award, which he received in 2015. In 2010, his works were included at the Whitney Biennal and the Greater New York show at MoMa PS1. The artist’s solo shows are happening every year. James is also a founding member of The Bruce High Quality Foundation and the Foundation’s free university, BHQFU.

The artist lives and works in New York City.