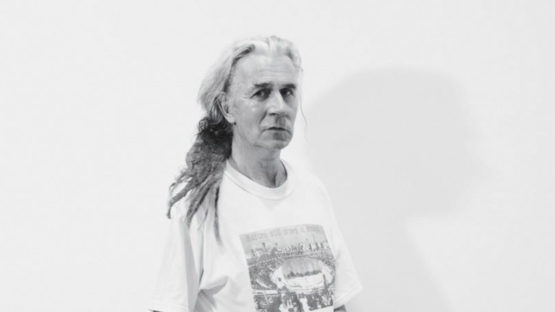 Primarily known for his extensive work with the legendary Sex Pistols band, Jamie Reid is a British collage artist whose work simply inspires punk culture. His art, whether it was for the band or made as a separate piece, came to define and symbolize the English punk rock scene of the late ’70s, massively contributing to this arguably most famous counterculture movement to have ever existed. Collages were and still are his focal point, although this Liverpool-based author also works with décollage techniques on regular basis. Besides his activities with the Sex Pistols, Reid was frequently in the center of the media frenzies for his pieces like the Cecil Beaton Silver Jubilee portrait of the Queen with a safety pin through her nose. These kinds of artworks eventually turned Jamie into one of the most famous anarchist artists to date.

Jamie Reid comes from a very politically active family, so no one was surprised when he started going down similar paths whilst still a young man. Most of his early protests were aimed against nuclear weapons, racism and the criminal justice system, all problems Reid believed civilized world suffered from. Jamie attended classes at the Croydon College in London, where he studied art and eventually met and befriended a fellow classmate called Malcolm McLaren, the future manager of the Sex Pistols. In the year of 1970, Reid left Croydon College and decided to start making his anarchistic dreams a reality. He aligned himself with the Situationists, a group based in France that advocated for a strain of libertarian Marxism. As a member of this organization, Jamie launched Suburban Press, a publishing outfit that specialized in producing materials for anarchists, women’s groups and other associations that saw themselves as being on the margin. In order to get better at what he did with Suburban, Reid developed his own new unique style of cutting up graphics and other elements of magazines, fusing them together via a collage technique that had the visuals of some sort of bizarre ransom note. In the year of 1976, Jamie received a telegram from his friend Malcolm McLaren who wanted him to come back to London.

Reid’s return to his home city brought him back in touch with McLaren who had recently formed and started managing the Sex Pistols. Fronted by a lead singer Johnny Rotten, this angry, brash young group soon became the face of English punk rock, a symbol of young resistance – and at least a part of this achievement was due to Reid. Working closely with the band, Jamie designed the artwork for the group’s debut studio album titled as Never Mind the Bollocks, Here’s the Sex Pistols. Later, Reid contributed by co-writing a few lyrics and designing cover arts for CD releases. His Union Jack flag with safety pins clipped to it and the Queen with a safety pin through her lip became not only the trademarks of Sex Pistols but of the entire punk movement. Following the Pistols’ end in 1978 and the demise of the entire British punk scene, Jamie continued to work as an artist, infusing his work with his political ideals.

Thanks to his brilliant artwork for Sex Pistols, Jamie Reid became an icon of punk music and anarchy

What Jamie Reid and His Art Mean to Punk

Ultimately, the art of Jamie Reid massively contributed to defining the subculture of the punk world, impacting generations either directly or retroactively depending on the time of their youth. His best work still enjoys massive respect within the English punk rock scene whilst his activities with the Sex Pistols virtually made Reid immortal within such circles of societies. All of Jamie’s pieces, completed fully or partially[1], are a clear reflection of how incredibly revolutionary, rebellious and unique punk was at its origins. It also serves as an indicator of how that particular subculture evolved and developed over time, making the work of Jamie Reid a precious source of explanations that will serve us very well in the decades to come.

Jamie Reid lives and works in Liverpool, The United Kingdom.

Featured image: Jamie Reid – Photo of the artist – Image via Marius W. Hansen
All images used for illustrative purposes only.