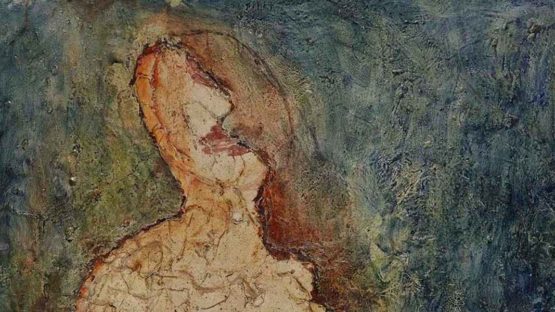 Jean Fautrier was a French painter, illustrator, printmaker, and sculptor, considered as one of the most important practitioners of Tachisme, a French style of abstract painting popular in the 1940s and 1950s. Essentially, Fautrier is also one of the France’s greatest painters of post-war themes.

Jean Fautrier was born in Paris in 1898. An illegitimate child, he was given his mother’s surname but was brought up by his grandmother. On the death of both his father and grandmother in 1908 he joined his mother in London, where he entered the Royal Academy Schools in 1912. Finding the teaching too traditional, he left to enrol at the Slade School of Fine Art, which had a reputation for being more avant-garde, though he was again disappointed. He then decided to work alone and devoted himself to painting, concentrating on nudes and still-lifes. He also regularly visited the Tate Gallery, where he was particularly impressed by the works of Turner. In 1917 he was called up for the French Army, but because of his poor health he was soon transferred to the auxiliary corps. Suffering from a pulmonary complaint, he lived in the Tyrol from 1920 to 1921 and was finally discharged from the army in 1921.

Fautrier’s early work, comprising still lifes, nudes and landscapes, appears tentative and derivative. Of particular note are a heavily scumbled arctic landscape that reveals Fautrier’s admiration for J. M. W. Turner and an image of hanging rabbit skins that brings to mind Chaim Soutine and Wols. Fautrier clings to the Cubist palette, perhaps to defend himself against the charge of bourgeois conservatism. It may be, despite all the attention devoted to his textures, that Fautrier’s primary achievement was as a colorist – a side he was to explore, often facetiously, in his later work.

Fautrier during the World War II and his Hostages series

In 1939, just as World War II was beginning, Fautrier left the mountains, moving to Marseille, Aix-en-Provence, and Bordeaux before finally returning to Paris in 1940 and starting to paint once again. In Paris he met several poets and writers for whom he created illustrations. In January 1943, he was arrested by the German Gestapo. After brief imprisonment, he fled Paris and found refuge in Châtenay-Malabry, where he began work on the project of the Otages (Hostages). This series, depicting dimensional, skull-like forms in fleshy pastel tones, were created while Fautrier, who had been harassed by the Gestapo, was keeping a low profile at a psychiatric asylum outside Paris. During the nights he reportedly overheard the Nazis’ torture and execution of randomly chosen civilians in the nearby woods.

His later work is abstract, predominantly in small scale and often mixed media on paper.

Exhibitions and recognition of Jean Fautrier

Fautrier gained a great deal of notoriety as a painter early on and remained in the public eye until the end of his life. He first exhibited his paintings at the Salon d’Automne in 1922 and at the Fabre Gallery in 1923. His first solo exhibition was at the Galerie Visconti in Paris, in 1924. However, Fautrier’s success was mainly celebrated in France, and he was little known abroad. He won a number of awards like the Grand Prix International in 1961, and was the guest of honor at the 1960 Venice Biennial.