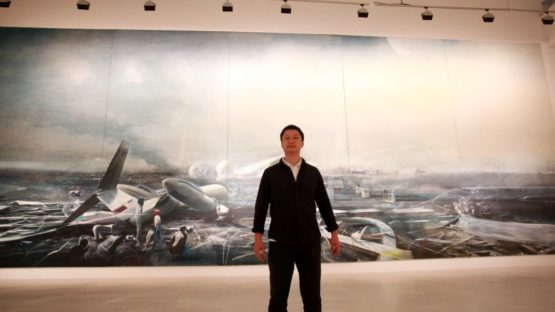 Jia Aili is a Chinese contemporary artist, who skillfully combines modern elements with a traditional figurative style. He uses abstract fragments of landscapes, whose monotony is interrupted by subjects that look as if they are searching for their inner self-meaning. The themes seen in his oil paintings are mostly focused on the dramatic technological transformation China has been going through in the last fifty years. In his monumental and visually amazing works the author tries to point out to the rapid urbanization of humankind, and the negative consequences it has on people, but also on the environment in general. The painter applies quick brushwork and a muted palette of colors like deep blue and green hues, to show the disoriented emotions of the society he lives in.

The artist was born in 1979 in Liaoning Dandong, China, at the time when one-child policy was introduced. In 2004 he graduated from the Department of Oil Painting at the Lu Xun Academy of Fine Art in Shenyang, and in 2006 he also graduated from the Research Institute of Oil Painting at the same Academy. Viewers can see the influence of the movements of Old Masters and Western cultural history. The inspiration to compare nature with death and industrialization comes from the works of romantics such as Eugene Delacroix and Theodore Gericault. In some cases, the painter chose Caravaggio’s The Incredulity of Saint Thomas as a basic point of his art.

In some cases the painter chose Caravaggio’s ‘The Incredulity of St. Thomas’ as a basic point of his art

The Meaning of His Art and The Impression It Leaves

In an interview in 2010, the painter explained that for him art is something which exists all around the people. As someone who likes to discover and pick up things that surround him, he relocates and relates his own experiences and imagination with objects, in order to express himself and his understanding of art. By using icy shades of grey, black, and white paint the artist offers the sense of solitary melancholic suffering. In his apocalyptic paintings people can see single faces, like astronaut’s helmet, as a reference to China’s first launch to space in 2003, and its affirmation as the global superpower. The oeuvre of the author’s work represents the troubles of his lonely generations, marked with the absence of siblings and with countries pursuit for technological progress.

By using icy shades of grey, black, and white paint the artist offers the sense of solitary melancholic suffering

The figurative and abstract elements of his paintings reinterpret the visual information of the world, through the use of sharp lines that create ominous compositions. His message is that the triumph of humanity is not guaranteed. He has exhibited his pieces around the world in places like Hartell Gallery in New York, He Xianjning Art Museum in Shenzhen, Institute of International Visual Art and Saatchi Gallery in London. The artist also participated in the 3rd Guangzhou Triennial in 2008. His art was also shown at the DoART in Beijing and at the Shanghai Art Museum.

He currently lives and works in Beijing, China.