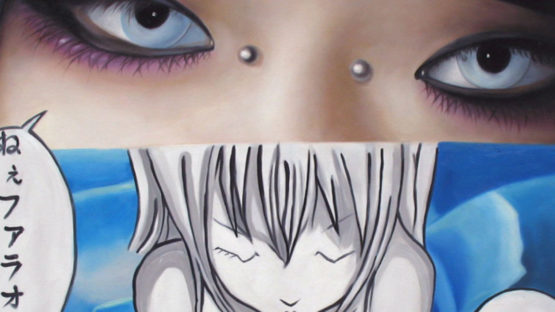 As a member of the young generation of Japanese artists, Jimmy Yoshimura stands out with his interesting representations of characters from different eras. Combining the past and the present, cartoonish subjects and real people from old photographs, Yoshimura makes impressive images, creating new kind of portrait. His work mostly indicates the influences of the western world. Using the traditional language and familiar subjects, his characters are the reflection of changes in Japanese society and culture. Excepting western customs and visual identity they become distorted persons, captured between their ancestors and foreign propaganda.

After his studies in Industrial Design, Yoshimura began his career in advertising design agency. At the same time, he took an interest in painting which determined his further preoccupations. Discovering his own talent, he started to produce his characteristic paintings representing portraits of Japanese women form different ages and centuries. Using the old black-and-white photographs portraying ancestral scenes and different images of Harajuku girls form nowadays, Yoshimura creates the unique combination of that two, transferring the compositions on canvas. Applying the simple pencil drawings of manga characters that are characteristic of the more recent Japanese tradition, he emphasized their role of intermediate between past and present.

Jimmy Yoshimura’s work has been exhibited in numerous shows in Japan and abroad. His seductive and disturbing paintings depict not so attractive changes in society where western influences took over all aesthetic and ethical principles. Photographs of ancestors invoke the old, traditional ideals and in combination with modern make-upped girls with vividly colored hair style and pierced faces represents the contrast of total opposites, although both belong to the same people. Manga characters seem like the mediation between them, the carriers of tradition in contemporary times. Transferring the message or maybe having the conversation with each other, every figure has the inscription in a cloud that refers to their mutual connection.

His paintings depict the changes in Japanese society

As a member of Crazy Noodles, Tokyo organization which promotes the creative activities of young Japanese artist who integrate pop culture into their artworks, Yoshimura stands out with his mixture of traditional and modern customs. Working between Tokyo and Paris, those artists are trying to find their piece of recognition, revealing and promoting Japanese culture on very distinctive way. Transferring his unusual combination of images into the canvas, Yoshimura connects the incompatible. Emphasizing these differences, he indicates the ruinous influences of the western culture.