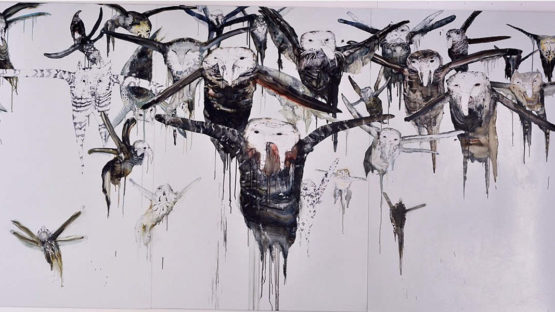 Joanna Mortreux, born in 1977, in Paris, is a Melbourne based artist whose practice revolves around the act of looking and of being seen. She has created works that deal with the confrontation and the scrutiny of a mutual gaze between two living entities. Her images are the exploration of that non-verbal space where time slows and the minutest assessments are made. In this tentative space the work explores issues of similarity and difference, vulnerability and power and our estrangement from and essential subjectivity we humans gain from our relation to the animal and the environment.

Mortreux holds a Bachelor of Fine Arts from the Royal Melbourne Institute of Technology, 2007, and graduated with Honours from The University of Melbourne, 2000. She completed an arts residency at TAKT Kunstprojektraum in Berlin, Germany, in 2011 and SIM Artist Residency in Reykjavik, Iceland, in 2010.

As a painter, Mortreux has increasingly been interested in the sculptural quality of her works. Realizing flat surfaces that look like marble, she always allows some parts of the paintings to emerge and open up to the surrounding space. Her new series, which includes photographic etching prints and photocopies, plays with the idea of sculpture without ever fully allowing these works to become the objects they aspire to be. The artist collects and re-works images taken from stately statues, museum artifacts and objects of fine art. By photocopying, cutting out and taping them together in awkward re-arrangements, she organizes these single parts into new and unexpected compositions. They could be altered replicas of the original references, but in fact fail both as replica and as sculpture. Becoming more of a stand-in for sculpture, they are traces of Mortreux’s on-going exploration of her medium and artistic process. Thus, the works on show deal with the topic of composition and with the continuous tension between 3-dimensionality and 2-dimensionality, between flatness and relief, between painting and sculpture.

Mortreux took part in various exhibitions in Europe, USA and Australia. She received the Julie Millowick Photography “Packers Prize” in 2007, the Kingston 24 Hour Arts Blitz 1st Prize, 2005, and the Dandenong Festival of Music and Art 1st Prize, 2002. Her work can be found in numerous private collections in Australia, France, New Zealand and Chicago.