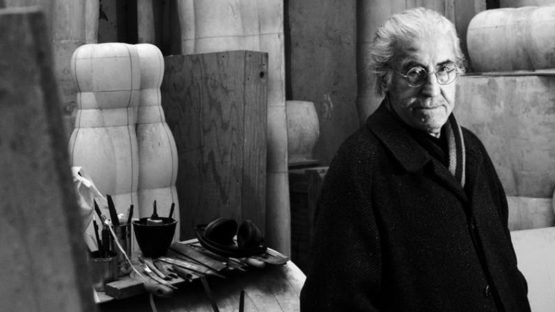 Joannis Avramidis was a contemporary Greek-Austrian sculptor whose career was marked by the search for the “absolute figure”. He was inspired by the classical antiquity and the Italian Renaissance, allowing the borders between abstraction and figurative depiction to merge in his sculptures. His works were characterized by softly rounded curves which only suggested the human body without defining it.

One of the most important protagonists of Austrian sculpture, Avramidis mainly worked with bronze according to plaster models, later applying the synthetic resin, or massive aluminum as well as copper and other materials. Even in its maximum state of abstraction, his works maintain a reference to human shape and posture, with physical features assigned through a stylized, horizontal segmentation. However, he focused not on the silhouette, but the “inner space of the body“ – a strongly compressed and condensed body which produces a compact form. In the 1960s, he increasingly began depicting bodies in movement, examining its dynamics.

Avramidis studied in Batumi and later at Fritz Wotruba in Vienna, as a student of Robin Christian Andersen and Fritz Wotruba. He became a professor at the Academy of Fine Arts Vienna and from 1966 in Hamburg. In 1962, he represented Austria at the Venice Biennale. 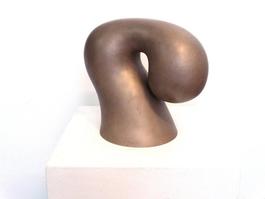 Kopf, Das Trojanis...Joannis AvramidisGalerie Ernst Hilger36 cm Sculptures and Ceramics50000 - 75000 EUR (€)
Contact
The below information will only be used to help you communicate with the gallery. The more information you provide, the faster and more likely you will get an answer.
Make an Offer

Thank you, your offer has been sent to Galerie Ernst Hilger. They should be in touch within the next 24 hours.

Thank for your interest in Kopf, Das Trojanische Pferd by Joannis Avramidis, proposed by Galerie Ernst Hilger. The asking price is currently 50001 EUR (€)