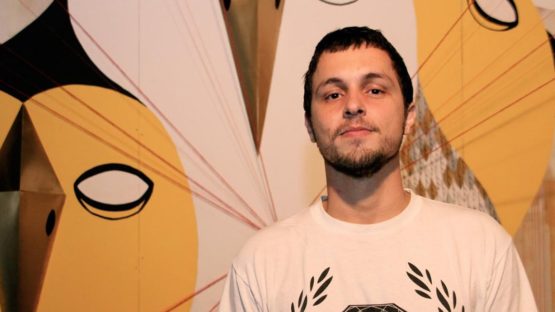 He was born in Rio de Janeiro and his work is full of symbolism, as a result of the artist’s reflection on the values and behavior of the society in which we live. And that is, among others, a strong reflection of his childhood influences such as cartoons and video games, has matured through the study of artists – mostly from the art nouveau and cubism movements – into a world of human or animal images morphing into each other in an extremely surreal way. His goal is to create a modern mythology in perfect connection with the urban everyday life.

Characterized by the compositions of animals and people, chosen because they have some interesting symbolism and portrayed in a synthetic form, they are represented by the interaction of bold shapes, textures and patterns, some created and developed by the artist, other reused from found materials.

Lelo says he is interested in the cycles of life and the meaning behind the food chain using animal instinct as a metaphor for human behavior. “It’s all a food chain. I use animals to represent human nature; one fish eats another as a human getting over another human. A bird with two faces to show different, perhaps hidden parts, of people. I find a lot of meaning in the animal world.”

He is best known for his work of urban art, which he performs since 1999. His works have been shown in exhibitions and publications in Brazil, United States, Germany, Spain, Austria, Greece, Argentina and South Africa.