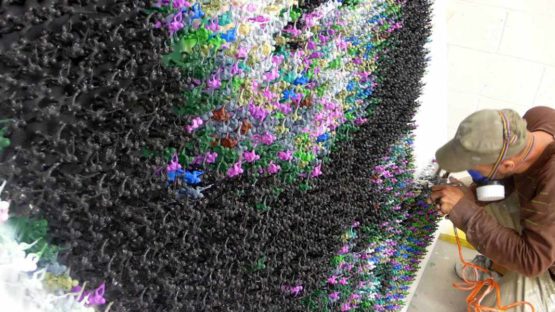 Joe Black is a British contemporary artist, born in 1973, best known for his large-scale, mosaic-like installations based on popular imagery, creating his own alternative form of pixelation. He demonstrates a level of skill that often falls outside the viewers’ understanding of what is possible.

Joe started as a sculptor and soon moved on to illustration. After working for many years as a successful commercial artist, he is now a full time fine artist. Black, who is uncomfortable being called a professional artist, now focuses solely on his personal body of art. Not referring himself as an artist, in his own words he is more of an ‘image-maker’.

Combining his love of materials with his craft, skills, technique and a passion for perfection, each piece is painstakingly created using thousands upon thousands of test tubes, plastic pins, badges or Lego Bricks. In most of his mosaics, every single one of the pieces that compose his artwork are hand painted, precisely arranged, giving the viewer a sense of depth.

According to the artist himself, he will use pretty much anything small enough to build his large images, creating vast tonal effects. In addition to these contrasting tones, Joe seeks to further enhance his pieces by selecting an object that will pay tribute to the iconic imagery it creates. This is perhaps best illustrated by his use of plastic toy soldiers in depiction of Robert Capa’s famous 1938 portrait of a Chinese boy soldier. Crafted from over 5,500 toy soldiers manufactured in China, this piece is therefore called Made in China. Another great example of Black’s thought-provoking, meticulous portraits is represented in work called Star, portraying Joseph Stalin, which is composed using hand painted chess pieces, in order to signify the Soviet dictator as a player who out maneuvered his political opponents to become a super power.

Another weapon of choice in Joe’s arsenal are handcrafted badges, which relate to the final product in some way. For example, his series displaying Superman and his fellow superheroes, called No more heroes, is made from fast food corporation logos, to convey the idea that goodness has been defeated by our ever-growing need to consume.

Since committing himself to the world of fine art, Joe has stormed the art world, stunning it with his powerful mix of image selection and craftsmanship. He is at the frontline of the current Pop Art movement and in the great traditions of craftsman before him, he is rigorous in his commitment to produce excellence. Black’s oeuvre explores the way we see pictures by making artwork that is both seen as a whole and as a collection of small united parts. His ambition is for the audience to experience the striking scale and the intricate detail at once. Artist’s debut solo exhibition Ways of Seeing at the Opera Gallery London, emphasizes the strong importance of seeing Joe Black’s work close-up and far away.

Since early 2012, Joe Black is exclusively represented by Opera Gallery worldwide. He currently lives and creates in London, England.