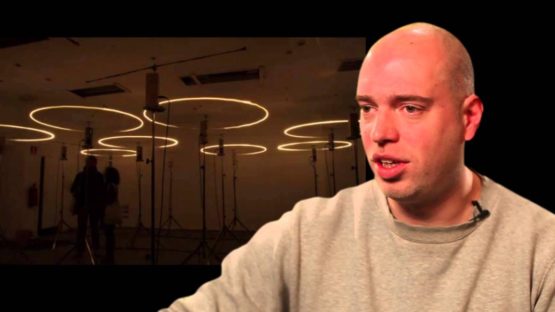 From Audio to Audiovisual

Joris Strijbos acquired his education mainly in The Hague. He obtained his Bachelor’s degree at the Royal Academy of Art, majoring in ArtScience, and later on earned his Master’s degree at the Royal Conservatory of The Hague. Strijbos originally began his career in music, as an experimental electronic musician, and became quite popular, especially in Europe. He then began to create video art to accompany his music, and eventually switched to software design in order to produce convoluted audiovisual experiences.

Strijbos’ art explores cybernetics, communication networks, artificial life and intelligence and emergent systems. The relationship of image, light and sound, and their synchronicity is a primary focus of his kinetic installations, where complicated synesthetic landscapes are constructed. Some installations use various algorithms built on biological systems, manifesting natural behaviors and organic structures of abstract light flow and arrangement. Immersed, the viewer experiences the interaction between the physical and virtual, computer-generated world.

Joris Srijbos is a part of Macular a group of artists who share the same passion as Srijbos for the combination of motion, sound, image and light, and how the said combination relates to our experience of the natural world. This passion yielded several collaborative works of Srijbos and other members of the group. Diagonaal is a 2008 installation by Srijbos, Daan Johan and Eric Parren, conceived as a live-cinema performance that focuses on conjoining the old and the new. Namely, the installation is about utilizing old analogue techniques and having them interact with new digitalized computer technologies. Thus, signals are altered and transformed, giving complicated light patterns and abstract images.

Created by the same three artists in 2009, the audiovisual installation Difrakti is inspired by the ever-present transformations of energy. The installation focuses on diffraction and interference sequences and patters of audiovisual composition. In real world, diffraction of waves is caused when they meet objects in space. However, since Difrakti is using a virtual space, these rules do not apply, thus creating beautiful and intricate patterns. Although digital, these patterns seem very organic.

Phase=Order is Strijbos’ first solo installation, created in 2010. It is conceived as a kinetic light installation, employing 96 moving screens to produce complex plays of light and shadow. Based on a research into self-organizing processes in nature that are then programmed into computers, Phase=Order’s main focus is on the audiovisual beauty created by these processes, and a natural choreography based on swarm behavior. Drawing from the knowledge of self-organizing systems in nature, and the algorithms describing complex swarm behaviors, the computer creates a virtual wind, and moves the screens. This gives the illusion of the wind blowing through the installation.

As already said, light is also relevant in Phase=Order. The screens are made of acrylic, the characteristics of which are to reflect and pass light through. At a certain angle, a screen reflects the light; at others, the light passes through it. Since the movement of the acrylic screens seems candid and natural, the reflection they cast is ordered and synchronized. The beams of light hit the surface of the installation, which then becomes a sort of a “canvas” where the art is created.

Even though the system is completely made of artificial materials, its behavior is governed by algorithms describing natural phenomena (in this case the behavior of the wind), thus breathing life into it.

Similar to this installation is a 2012 kinetic sculpture, Homeostase. Based on biological systems, numerous rotating objects are programmed by a computer to create a play of repulsion and attraction, guided by the language of the swarm.

Revolve, a 2011 installation, came about as a joint effort of Joris Strijbos and Daan Johan. The name “Revolve” refers to a kinetic machine, comprising hundreds of LED lights. It is designed to emit and scatter patterns of abstract light. The LEDs are arranged on a rectangle that spins fast. It is governed by an algorithm, creating lines and pulses of light. The combination of the spinning of the rectangle and the emitting of light can be interpreted as a message the machine sends, or a Morse signal. With time, while watching the LEDs, experience becomes even more exhilarating, as the viewer’s retina produces the negative light patterns that combined with the ones emitted by the machine.

The duo didn’t stop there. In 2013, they made a similar machine Parsec, only this time, sound was involved as well. Swarm synthesis is employed here again. Parsec comprises 16 arms, each of which has two LED lights and a loudspeaker that sounds when the arms are rotating. Unlike Revolve, Parsec performs swarm-like behavior of not only light, but sound as well.

Covex is a 2013 collaborative installation between Joris Strijbos and a Spanish composor Yamila Rios. In this performance, the artists are trying to find the connection between light patterns and electro-acoustic sound by mixing the two media. The auditory part of the installation consists of a live cello performance. The sounds cello makes are then translated onto a screen, creating beautiful abstract landscapes with complicated color patterns and constant changing of shapes.

Created in 2014, Cycles is Strijbos’ another audiovisual installation. It was inspired by the effort of Thomas Wilferd to visually present music, and his development of “Lumia” in 1920s. The light patterns are created by firing laser beams through moving transparent objects. The organic shapes that emerge from this, “agree” with the evolving sound rhythm, bringing them together in an unforgettable experience.

Line_Reflect is a result of an effort to comprehend the cybernetic behavior within sound, movement and light. Just as in Cycles, Line_Reflect’s integral part is laser beams that are shot towards rotating mirrors. Reflected, light creates tangled web of complex patterns. At different points, there are light-sensors, and when a beam of laser passes by, they oscillate. Since both lasers and sensors are connected to a computer, their movement generates sounds to accompany the shifting light.

In the 2015 U-AV installation, Strijbos joins forces with Matthijs Munnik to create beautiful landscapes from imaginative video, electronic sound and light. The installation came about as a result of a study on how people perceive visually complex images with interference of flickering images and loud pulsing sounds. The specific frequencies and colors of light cause hallucinatory images which mix with the video projection. As a result, the audience is mildly hypnotized and trapped in the beautiful abstract worlds passing before their eyes.

Thanks to his incredible talent and understanding of complex digital systems, Strijbos has participated in numerous art shows and festivals throughout Europe. He partook in Ars Electronica festival in Linz, Austria, DEAF Biennale in Rotterdam, WRO International Media Art Biennale in Wroclaw, and Sonic Acts Festival in Amsterdam. His work has also been exhibited in Woodstreet Galleries in Pittsburgh and Van Gogh Museum in Amsterdam. He is represented by NOME gallery.

Joris Strijbos currently lives and works in Rotterdam, the Netherlands.