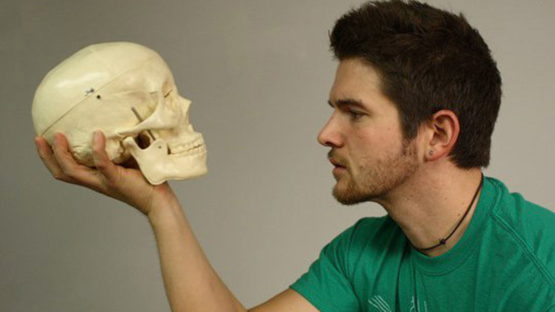 Justin Henry Miller’s paintings are meticulously rendered, finely wrought realist sci-fi fantasies of a bio-medical graveyard that take place in the (maybe not so distant) future, after the experiments have concluded and the labs have been abandoned. Failed experiments are mixed with semi-successful results in the now defunct paraphernalia and discarded equipment of bio-medical waste. Fetal tissue and synthetic organs are encased forever in a state of suspended animation. Artificial respiration, insemination, and even perspiration are machine generated in self sustaining perpetuity. Although it may seem unlikely at first glance, his work is inspired by a youth spent on a horse farm nearby Arcola. “That really allowed me to see a lot of things from an interesting scientific standpoint,” said Miller of his rural beginnings. “I’m seeing my father perform inoculations and selective breeding practices… it definitely resonated in my mind. With a lot of my paintings, I’m almost imagining the experiment that’s gone awry or didn’t quite work out. The elements that compose my paintings, I think of them as almost the leftovers or byproducts that are trying to resist expiration.” What initially begins as harmless bio-mimicry, creating a better future through chemistry and technology, devolves into a dystopia, rife with the cast-offs of unintended consequences and a garbage dump heap of bionic refuse stacked and left to rust and rot in the landscape. In addition to the paintings are series of found antique and vintage photographs of individuals and families, altered with the same fastidiously painted surfaces that Justin uses in his original compositions. He delights in the absurd results of combining Victorian poses, restraint and correctness with mutant children and sea creatures as hats. Staying with that theme of finding use for leftovers, Miller has combed antique stores and flea markets for old photographs. His collection includes many paintings using these vintage portraits as a base.

His work has been exhibited at the Snite Museum of Art, Notre Dame, at Midwestern Museum of American Art, Elkhart, at Swope Museum of Art, Terre Haute, at Artlink Contemporary Gallery, Fort Wayne, in Zg Gallery, Chicago and Aron Packer Gallery in Chicago. For his work he received numerous awards. In 2010, Feature Artist Award, in 2009 he was appointed Artists Residency, at The Distillery, South Boston. Merit Award, from Midwestern Museum of American Art in 2007, Outstanding Graduate Student Teaching Award, from the Kaneb Center for Teaching and Learning, Notre Dame University in 2006, Merit Award, from the South Bend Regional Biennial and Purchase Award, from the South Bend Regional Biennial in 2005, Graduate Fellowship and teaching assistantship from the University of Notre Dame in 2003, and Merit Award at the Tarble Arts Center Eastern Illinois University in 2001.

He now teaches painting, drawing, and design at the University of Saint Francis. Along with teaching he maintains a rigorous studio practice, mostly painting.