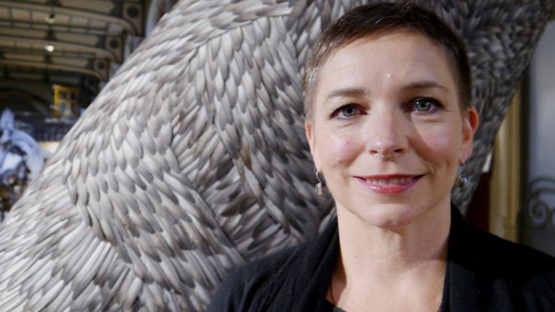 Kate MccGwire is a British sculptor born in 1964, Norwich, UK  who specializes in the medium of feathers. Kate MccGwire’s practice probes the beauty inherent in duality, exploring the play of opposites – at an aesthetic, intellectual and visceral level – that characterizes the way we conceive the world. She does this by appealing to our essential duality as human beings, to our senses and our reason, and by drawing on materials capable of embodying a dichotomous way of seeing, feeling and thinking. The finished work has a consistent ‘otherness’ to it that places it beyond our experience of the world, poised on a threshold between the parameters that define everyday reality.

Her work experiments with the binary notions of beauty and disgust, malice and tranquillity, and the familiar yet otherworldly. Her use of pigeon feathers takes a waste product of the ‘rats with wings’ and elevates them to the status of art. By re-framing the object, placing it out of context, it generates a kind of ‘field of attraction’ around it, the viewer is left both seduced and alienated, relishing the spectacle but at the same time aware of something disquieting, something ‘other’.

Much of Kate’s practice references Freud’s ‘Unheimliche’ (the uncanny, or, literally, the ‘unhomely’), the idea of a place where the familiar can somehow excite fear. It also embraces artistic notions of the Abject. In so doing the artist creates a shift from a world in which objects sit in their conventional place and allows a new perspective, exposing the viewer, in the most visceral way possible, to the truths that lurk behind the familiar and to the reality of what it is to be human – a brutal but also unrelentingly beautiful consciousness of the ugly and the funereal, fear and disgust.

MccGwire’s exhibition history includes solo shows at All Visual Arts (2012) and Pertwee, Anderson and Gold (2011) as well as numerous group shows alongside artists such as Polly Morgan and Jake and Dinos Chapman. MccGwire’s work is also collected by several notable figures in the art world including Charles Saatchi.