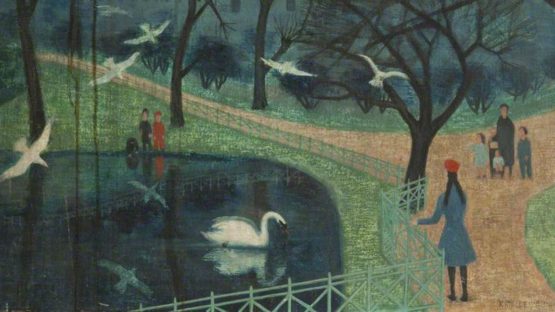 Kathleen Guthrie, born in 1905, was a British painter. She entered the Slade School of Art in 1921, studying under Henry Tonks, and three years later won a scholarship to the Royal Academy Schools. With her husband, she moved to the US. Appreciated by American audience, she had her firs one-person exhibition at the Grace Horne Gallery in Boston in 1932. The same year the Guthries returned to England and settled in Sussex, where Kathleen continued to paint in a simplified style, working in both oil and gouache. Guthrie also produced silkscreen prints and textile designs, as well as writing and illustrating a number of children’s books. By the late 1950’s, inspired by the work of Stephenson, Guthrie had begun moving towards pure abstract compositions. A large retrospective exhibition of Guthrie’s paintings, at the Drian Gallery in London in 1966, included both abstract and figurative compositions. The exhibition elicited a number of positive reviews. Kathleen Guthrie died in 1981.