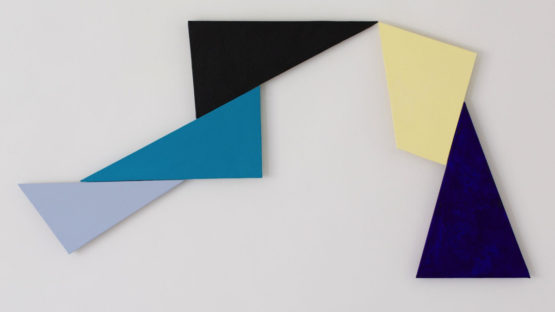 A committed modernist, working in the minimalist tradition, Ken Greenleaf creates work embedded in a philosophical and theoretical framework. His work is characterized by geometric forms, while at the same time having a freeform aspect, forcing us to mentally organize what we’re seeing into “ideas.”

Greenleaf came to prominence by creating large and strongly physical welded-steel structures with complex ground planes. Over time, his work evolved to more complex structures produced with two or more materials, which depended on the distinctions between materials for their content. Developing a syntactical vocabulary reflecting actions, he theoretically based his works on the feeling that they had a past and that random, deconstructive effects were at work on their appearance.

In Greenleaf’s work, there is a tension between flatness and the feeling of and desire for illusion, bringing us to a place between raw sensation and the conceptual, which is ultimately a metaphysical one. The edges of his shaped surfaces, the color of his raw canvases, and the borders of his painted areas are perceived by him as “direct essays in understanding how we apprehend what we see and how we recognize what is real.”