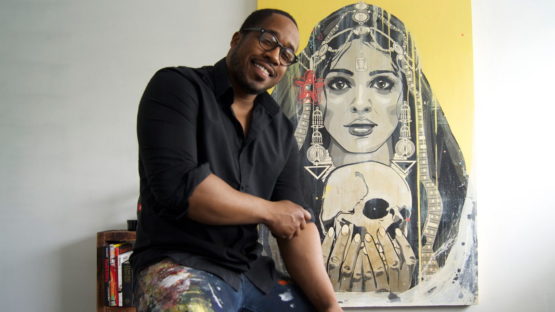 Kestin Cornwall is a Canadian contemporary painter, whose work challenges and questions the relationship between art, social rights, politics, and freedom. Cornwall was born and grew up in the Canadian area of Windsor, Ontario. With a Grenadian father and American mother, Kestin moved to the nearby Detroit, Michigan. The city of Detroit introduced him to the American culture and society – music, fashion, racial divisions, food and cars, different from his childhood spent in Canada. In 2001, the artist decided to move back to Canada and live in Ontario, where he began his artistic training.

Cornwall completed the Art Fundamentals and Illustration programs at Sheridan College, Oakville in 2002 and 2006, respectively. While studying at the Sheridan, his interest and love towards arts increased and developed quickly. At this period, Kestin experimented with possible combinations of both classical drawing and painting with contemporary digital reproduction and screen-printing, working with uncommon, unconventional materials. In 2006, Kestin Cornwall’s artworks received the CAPIC Best In Show Award.

Over the last ten years, Kestin Cornwall worked in a variety of techniques and mediums, ranging from painting and drawing, to wheat-pasting, screen-printing and installation. Developing his own visual style, the artist remained focused on creating relevant progressive art that will challenge and question the considered notions and ideas of ‘common’ and ‘normal’ in his surroundings. While doing this, Cornwall is also interested in creating beauty that will invoke the unending social responsibility to capture thought.

With each piece, Cornwall analyses our society’s obsession with beauty, age and change

Throughout his career, Cornwall was under the influence of various aesthetics and visual styles. Old masters of painting, such as Jan van Eyck and Hieronymus Bosch, were his early influences, besides environment and experiences. He also listed old comics, Street Art, pop culture, and Asian, Egyptian and Sri Lankan culture as the great sources of inspiration in terms of symbols and elements they possess and messages they can convey when used in a suitable way. With each piece, Cornwall analyses our society’s obsession with beauty, age and change, and at the same time mirrors notions of mass culture, commenting on society and political issues like colonialism and immigration.

Jezebel and Other Exhibitions

Kestin Cornwall’s art has been exhibited mostly throughout Canada and the US. Among several notable group shows, including exhibitions at venues such as Lee’s Gallery, Los Angeles in 2010, and INDEXG Gallery, SMASH, Tenderloin Gallery, all located in Toronto, Kestin Cornwall had his first solo exhibition titled Jezebel in 2012, at Goodfellas Gallery, also in Toronto. In addition, the artist participated in several projects, including Tribute To John Michel Basquiat show held at Revival, Toronto in 2004, and T.O.P Tour Life Styles Edition in 2006, at Yves Laroche Gallery.

Cornwall’s work has been featured in various publications such as NOW Magazine, Nuvango and Bizarre Beyond Belief, among other notable online blogs and magazines.

Kestin Cornwall is based in Toronto, Ontario.