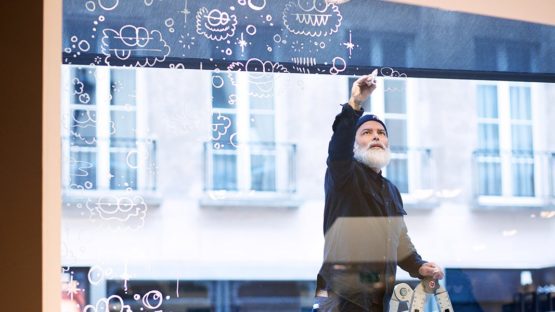 Kevin Lyons is an American artist – creative director, designer, illustrator, and a founder of Natural Born.

Kevin Lyons is a graduate of the Rhode Island School of Design where he received a degree in film and has a Masters Degree from CalArts. After CalArts in 1998, Kevin Lyons has worked for Nike, both in and out of house, has been Art Director of Urban Outfitters on two separate occasions and has been Art Director at Girl Skateboard Company. He has worked with such clients as Converse, Umbro, Coca-Cola, American Express, among others. In 2010, he won an Emmy for title design for Eric Ripert’s PBS series, Avec Eric, and also won a Cannes Golden Lion for his campaign for Diesel while Managing Partner at Anomaly NYC. As the former global Creative Director for Urban Outfitters, in a 7-year tenure, he helped shape the brand holistically, including: exterior signage, retail environment, digital design, packaging, posters & promotions, book and catalog design, labeling, and products (t-shirts, apparel, and lifestyle product graphics). Kevin also led the acclaimed music program, oversaw the brand’s PR and marketing and the corporate design for the umbrella company Urban Outfitters, Inc., (Anthropologie, Free People and Urban Outfitters).

Prior to Urban Outfitters, Kevin served in a variety of diverse roles including, Design Director at Stussy Worldwide; Art Director for Spike Jonze’s Girl Skateboard Company; US Art Director for Tokion Magazine and Senior Designer for Nike Inc., where he was responsible for branding several big-time college and pro sports franchises.

In 2001, Kevin was named to “The Top Forty Designers Under Thirty” by ID Magazine. He has written articles for the AIGA Journal, as well as addressing the AIGA twice including once as a published recipient of its Fresh Dialogues Series. He has held teaching assistant positions at both RISD and CalArts, and has been a visiting critic at the Yale Graduate School of Design. He was an Assistant Professor of Typography at the Pratt Institute from 2000-2002.

Kevin produces two clothing lines; one for 2K, called Atlantis and the other under his personal namesake, NATURAL BORN – both are distributed globally. His own work has been published worldwide from Thrasher, The Face, Lodown, The New York Times Magazine, Arkitip, Anthem and Refill. He has shown worldwide including solo shows in Paris, Philadelphia, Los Angeles, San Francisco, and Tokyo. His books and zines are available from And Press and Nieves.

He lives in BK and Philadelphia.