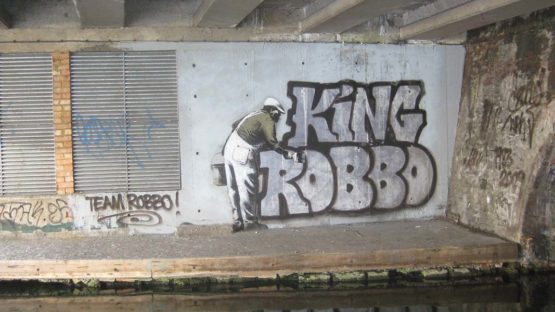 King Robbo is an English underground graffiti artist who became more widely known following a graffiti war. There had been a previous meeting between Robbo and another street artist in the nineties during which Robbo claimed he slapped the artist, a claim the artist denied. A Channel 4 documentary “Graffiti Wars” about the feud was first shown in August 2011.

Robbo painted his first train in 1985 and the ‘Merry Christmas’ train of 1988, a joint piece created with “Drax WD”, received coverage on ITV news and in the Independent.

The feud led to a rise in Robbo’s profile and he began entering the commercial art world with a number of gallery shows and commissions in 2010/11. In February 2011 he painted a giant portrait for the opening of the film Yelling to the Sky on a wall on the Kunsthaus Tacheles, Berlin.

In 1985 King Robbo painted a large full colour graffiti piece called Robbo Incorporated on a wall beside Regent’s Canal in Camden, London which was only accessible by water. Over the years it became degraded with a few small pieces of graffiti over the top. In 2009 a stencil artist, allegedly Banksy, covered most of it with a stencil of a workman pasting wallpaper. On Christmas Day 2009 Robbo responded by covering the work so the workman appeared to be painting King Robbo in silver letters. Three days later the letters Fuc appeared before the King. Tit-for-tat overpainting continued at the site with artwork and insults including a picture of Top Cat leaning on a gravestone with the words “R.I.P. Banksy’s career”.

This incident led online outrage against Banksy and a graffiti war with many of Banksy’s other works being altered by “Team Robbo”. Notable including the piece Hitchhiker to Anywhere where the “anywhere” was changed to “going nowhere”.

On April 2, 2011 King Robbo sustained a life threatening head injury 5 days prior to his exhibition at the Signal Gallery, Shoreditch: ‘Team Robbo – The Sell Out Tour’. It is believed the injury happened as a result of an accidental fall. His recovery has been slow and as of October 2011 he remained in an induced coma.

Sadly to many of his devoted fans in UK and around the globe, King Robbo passed on 31. of July 2014. RIP King Robbo.