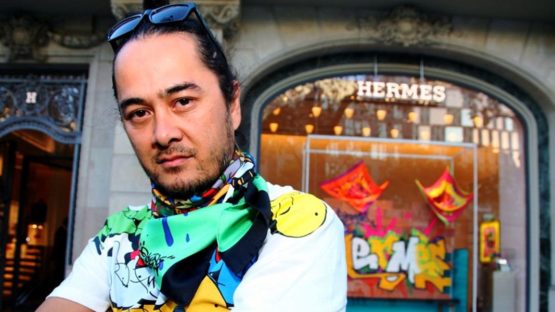 Born to a Vietnamese father and French mother, after the fall of Saigon in 1975, the artist lived two years in the Republic of Congo with his mother. Kongo first started doing graffiti in 1986. He was a part of the famous MAC Group – Mort Aux Cons. Kongo was first known as a tagger and graffiti artist on the Parisian, European and American urban scene. In twenty years of practice, he became a recognized international Graffiti artist. He has contributed greatly to defend graffiti as an artistic discipline.

Besides the wall, his favorite mediums are also the pavement, metal, canvas, Plexiglas, ceramics, photography, paper and glass. His works reflect the cosmopolitanism, the transition from one century to another, the era of miscegenation and overconsumption. He gained an international reputation for his unique artistic identity, and is the co-founder of the international Graffiti Festival.

In 2012, French luxury brand Hermes has teamed up with the artist, and the result of this collaboration is a stunning and successful scarf collection featuring the explosively colorful designs reminiscent of Kongo’s street work. At the present, new projects are being born in the mind of Kongo. Never lacking in inspiration, this talented and eclectic artist has not explored all possible fields of action.

Kongo has participated in many national and international festivals, exhibiting his works. His art was also featured in several gallery exhibitions, mostly in France. His works are now part of important private collections.