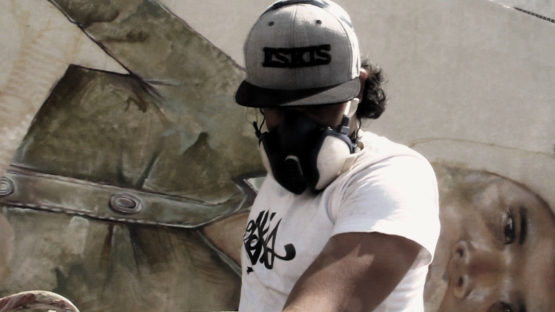 Koz Dos, born in 1986, is a Venezuelan graffiti artist who made his first steps in the Caracas hood. He is famous for his photorealistic and colorful portraits of people and frames, often using geometric patterns. Dos graduated in Painting from the Arts University (UNEARTE) in Caracas, Venezuela, and also got the degree from course in plastic art.

While working on graffiti, bombs and tags, Koz Dos has developed his original style of figurative and representative graffiti, in which he creates imaginary characters who harmonize the realistic images with triangle lines and dots. In his work he paints portraits of people mixed with animals, usually presenting realistic faces inside the mouth of animals. They show confrontation between mankind and animal in the fight for survival, as well as certain level of harmony and coexistence between them.

Koz Dos has participated in many events and exhibitions in his home country as well as abroad. His works can be seen in Caracas, Maracay, Venezuela, Berlin, Germany, Paris, Perpignan, France, Madrid, Barcelona, Spain, Quito, Ecuador, San Jose dos Campos, Curitiba, Brazil, Cali, Colombia, Tel Aviv, Israel, among many others.

He lives and works in Caracas, Venezuela.