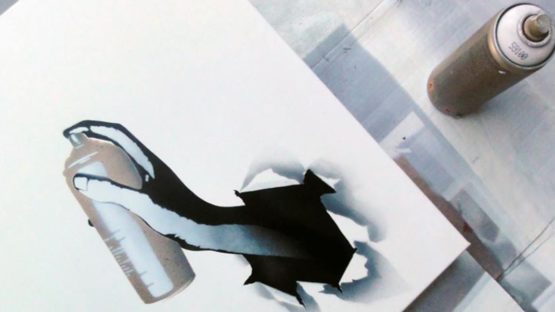 Kunstrasen is a German stencil artist who derives his name from the German term for astroturf, or a surface of synthetic fibers made to look like natural grass (fake grass). In addition to a sly bit of wordplay (kunst = art), his chosen moniker is relevant to many pressing questions in the art world today, particularly those relating to issues of authenticity, mimicry, and mass production. The life of this German urban artist is kind of mystery, on purpose or not. One of the rare things we know about his identity is his real name – according to forums, it could be Phil. But, the lack of official info shouldn’t be an obstacle to getting into the Kunstrasen’s world of “an honest one layer stencil!”, as he likes to call it: Since there seems to be a trend towards the more layers the better I thought I’ll do a one layer stencil to underline that I was never that good in being trendy…

Kunstrasen’s artwork makes comments which question everyone’s relationship to art, especially within urban and pop art genres. His stencil work is clean and well executed and the artist has an instinctive ability to create strong visual puns and eye-catching images. When first confronted with the works of Kunstrasen, they may seem superficially indistinguishable from the works of any of the horde of Banksy wannabes – but to pass judgment in this way would be hasty. In a landscape dominated by Banksy clones attempting to cash in on the sudden popularity of a medium which can be rapidly and cheaply produced, what is the value of a form when it becomes divorced from the danger and transgression inherent in the origins of street art.

In 2013 he appeared in London Art Show 1, together with ABC, James Welton, Pure Evil, Bisser and many others. The goal of this show was, according to the organizers: “to boast lots of art with prices starting low and free giveaways”. The idea was that the art is sold directly off the walls and then replaced with more the next day, so that public would wish to come back and pay another visit, to see some new pieces. Also, live painting by SR47 aka Skiprat and Kunstrasen attracted a whole bunch of visitors. The homogeneity of the market and the proliferation of mass produced, gallery-ready street art was the subject in Kunstrasen’s crosshairs as he prepared a collection of works to be exhibited at solo show for the first time.

A homage to the artworks of Lucio Fontana

In 2014, Kunstrasen held his first solo exhibition, Rough Times for Dreamers, at the artROOM Konstanz. Amidst the rapidly converging realms of stencil graffiti and contemporary visual art, Kunstrasen’s gritty and challenging show made some waves by challenging gallery audience’s eager consumption of mass-produced urban images. Rough Times for Dreamers was considered to be Kunstrasen’s chance to finally see his audiences in a different environment discussing his artworks. When street art is being pulled out of the streets and taken into the galleries, Kunstrasen offers a new reading of the problem.

In a landscape dominated by Banksy clones attempting to cash in on the sudden popularity of a medium which can be rapidly and cheaply produced, what is the value of a form when it becomes divorced from the danger and transgression inherent in the
For this show, Kunstrasen picked up on some older ideas/images as well as totally new ones.
For example, on a piece titled This was Art, the thread was real… For the author, it was more interesting to do so and after some experimenting he realized it was better looking than painted on.
But, on the show was mainly new body of work, based on the irony and re-interpretation of art. There were multiple specials around the show based on the brand new original works which are for view but sale, as well.
Kunstrasen stayed in Konstanz for the entire week of the show, creating murals, finishing original work and heading the gallery installation.

In 2015, EBay Art auction was raising money for Nepal earthquake Disaster, by selling works of the artist willing to help. Kunstrasen donated his work Spot remover and 100% of the auction results went to DEC Nepal Earthquake Appeal.

Kunstrasen lives and works in Germany.