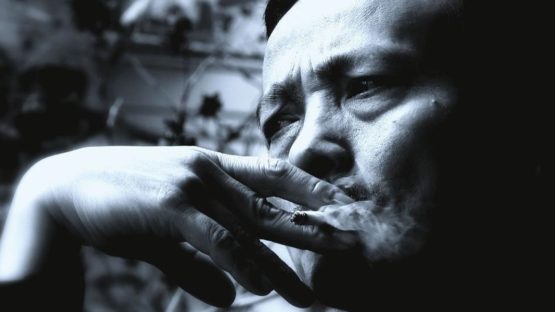 Le Quang Ha is a Vietnamese painter and sculptor, born in 1963. His art dares to negate old and established things, especially those that are unprogressive, and to challenge tradition, culture and values. ‘One has to break down idols, even if it is God, to let oneself fabricate a more civilized and new cultural order’, as the artist states.

Born in Hanoi, he graduated from the Hanoi Industrial College of Fine Arts in 1992. Le Quang Ha creates slightly disturbing, yet very intriguing paintings, avoiding traditional, academic subjects in his art. He instead chooses to address issues that many artists prefer to overlook or even ignore in their work, with much vitality, meaning, and social critique in the brutal honesty of his art. With its ironic comments, his art addresses subjects, which the young generations of Vietnam are confronted with, making a discourse on the clashes between tradition and the modern values of contemporary Vietnam.

With our existences filled with excess falsehood and veiled by too many beautiful words and hypocrisy, Le Quang Ha attempts to strip off all these, in order to understand thoroughly the root cause that leads people to cupidity and wickedness. His recent exhibition, named Blinded realism, gives the view of the world producing and reproducing the monstrosity of its grotesque corrupting power-games of domination and subjugation of thought and individuality with its surreal frightening connotations of one being doomed to it. The mechanized and ghost-like demons Le Quang Ha’s art is besieged by, are suggestive of the artist’s frustrations with the world of conformity, imposition of sameness and corruption of thought he portrays in his works.

In addition to painting, he has a passion for architecture and sculpture. His goal is not to separate the two concepts, but to see them as one unique body, used effectively in bringing aesthetic benefits for public places.

In Vietnam, his art is still regarded as an outburst within the official and social framework. Nevertheless, it is the very controversy that he arouses which has become the leading indicator of the importance of his art. Le Quang Ha has participated in several exhibitions in Vietnam, and also taken part in shows in Germany, China, Switzerland, Hong Kong, Japan, the United States, Korea, Indonesia, and Great Britain. His paintings are in the permanent collections of the Fukuoka Asian Art Museum, Japan and the Singapore Art Museum.