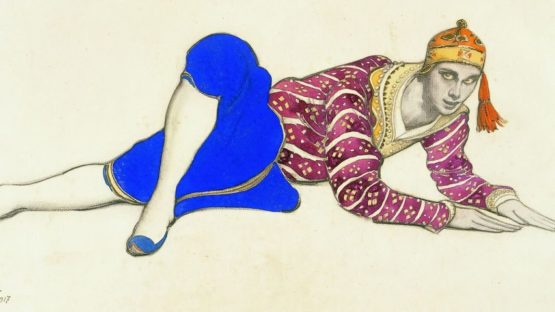 The fascination with the organic forms and crafts heritage inspired Leon Bakst greatly of becoming one of the most prominent representatives of Arts and Crafts movement in Russia. His outstanding imagination and prolific approach were in accordance with his exquisite skillfulness and sense for composition. Though trained as a painter, Bakst successfully employed immense efforts to transpose that experience on other media, for which he later became famous.

Léon Bakst was born as Leyb-Khaim Izrailevich Rosenberg in 1866 in Grodno. He was raised into a middle-class Jewish family. His grandfather was a tailor associated with Tzar, so young Bakst was somehow exposed to the arts from the very young age. Shortly after finishing gymnasium, he started studying at the St Petersburg Academy of Arts and worked part-time as a book illustrator. Around 1889 the artist took the surname Bakst, which was his mother’s maiden name. A couple of years later, the artist started exhibiting with the Society of Watercolorists and from 1893 to 1897 lived in Paris, where he studied at the Académie Julian. Bakst continued painting, producing portraits and worked as an art teacher for the children of highly ranked Duke from Tsarist family.

Refined and flamboyant approach to costuming

Leon Bakst and World of Art

World of Art or Mir Iskusstva was a Russian magazine and the artistic movement gathered around the idea of introducing innovative and non-conventional painterly practice based on their active negation of the modern times, similar to Romanticist movement. The artistic group was founded by the couple of art students in 1898 among which was Bakst. They were rather influential and their program concerned all culture fields including not only the painting but theater, book design, applied art, furniture and interior design. From 1909 many of the participants became affiliated with the sensational Ballets Russes, the company operating in Paris which included the best young Russian dancers, among them Anna Pavlova and Vaslav Nijinsky.

On the beginning of the 20th century, Leon Bakst worked mostly as a stage-designer, focusing on scenography for Greek tragedies. In 1908, the artist started working as a scene-painter for Diaghilev with the Ballets Russes and has actively produced scenery for most of the theatrical plays which they have performed. During that time, Bakst realized a series of not only outrages and elaborate set designs, but costumes as well. The artist employed color, exoticism, and barbarism in order to express the spirit of a culture and translate it into theatrical terms without destroying the essence. The whole spectacle was rather innovative and different than the usual ballet form. The collaboration lasted until 1922 when Bakst broke the relationship with Diaghilev.

The Great Legacy of Leon Bakst

In between this quiet long period of time, which was devoted to the company, Bakst often visited Saint Petersburg where he taught in Zvantseva’s art school. Interestingly, one of his students was no other than Marc Chagall. In the mid 20’s, Leon Bakst visited the United States frequently due to the developing relation with his friend and patron, art philanthropist Alice Warder Garrett who became Bakst’s representative in the United States and organized two exhibitions of the artist’s work in New York, as well as subsequent traveling shows. He re-designed the dining room of Garret’s residence and that is considered as the only private theater designed by Bakst. In that period the already established artist resided in Paris, but unfortunately started suffering from lung problems and in short time passed away. The achievements of Leon Bakst were great since the artist introduced practically new aesthetic and different approach to work in regards to not only the painting but theater and even education.

Featured image: Leon Bakst – Costume design for chinese dancer, 1917 – image courtesy of The Red List
All images are used for illustrative purposes only