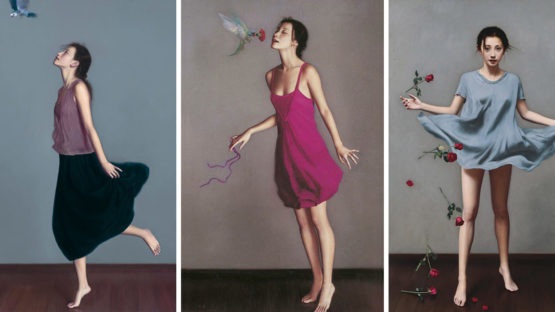 Li Guijun has painted adolescent girls exclusively for almost twenty years. The artist takes Chinese girls as the medium because they are brought up in a simple and disciplined environment, one that they live in their own world, a pure and loving dreamland. During the period between childhood and adulthood, physically and psychologically, they are like buds ready to blossom. His “girl next door” series of works brings the viewer into his inner self to find a moment of silence far removed from the daily pressure.

Born in Beijing,China in 1964. Li graduated from the Central Academy of Fine Art in 1988 subsequently obtained a Master’s degree in oil painting at the Academy in 1995. Li Guijun recognized as one of the China’s “Fourth generation painters” and together with 13 leading Realism artist he contributed in forming Bejing Realism Group.
In order to achieve aesthetic excellence, Li Guijun has spent all his time and energy on colour, composition, structure, and particularly on the planning and manipulation of each and every detail. In this sense, every work of his is not a result of spontaneity, every one of his works is a design of precision. Using an unusual painting process, he starts with the head and works his way down to the rest of the character leaving the background until the end. To paint flesh realistically, he uses a finely rendered mix of brown, red, blue, green, turquoise blue and white tones inspired by the artist Rembrandt. Li Guijun paints an ideal world of peaceful elegance and the hieratic poses and expressions of his characters illustrate their separation from reality.

The artist has widely exhibited at home and abroad and held exhibitions in cities notably, Beijing, Hong Kong, Taipei, Brussels and many other European cities. His works are amongst major museum and private collections, namely Shanghai Art Museum, the Burgers collection in Hong Kong, China National Museum of Fine Arts, whilst consistently fetched impressing auction results.