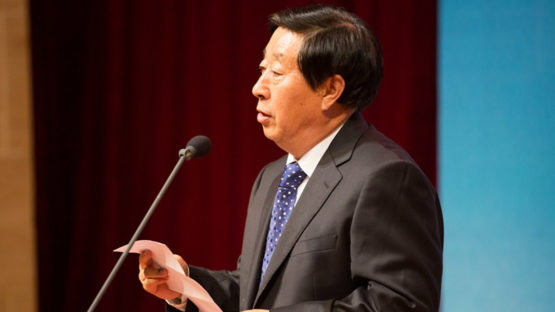 Liu Dawei is especially proficient with figure painting. Most of his paintings are well known for reflecting the daily life of the Northwest minority races of China. Many of Lui Dawei’s painting have competed in national and international art competitions where they have won over 30 awards. One of Mr. Liu’s paintings was chosen as a national gift that President Jiang Zemin gave to the leaders of Japan on his 1992 State Visit to Japan.

Liu Dawei was born in 1945 in Zhucheng, Shandong Province and graduated from the Fine Arts Department of Inner Mongolia Normal University.  He continued his studies at the Chinese Painting Department of the Central Academy of Fine Arts following which he studied with Ye Qianyu, Jiang Zhaohe, and other well known Chinese artists.

He has a solid mastery of basic skills of drawing, makes great efforts to be innovative and is good at fine brushwork and freehand brushwork. After long-term practice of artistic creation, he has gradually formed his own artistic style with distinct individual features, whose works are well-painted and profound with strong living flavors. His works are famous for reflecting the living styles of northern minority nationalities and major historic subject matters.

In the past few decades, a number of Liu’s paintings have been shown in China, the U.S.A., Japan, France, Singapore, Hong Kong, Macau and Taiwan. Having been awarded more than 30 times, Liu is the artist who gained the largest number of prizes. He is also one of the most accomplished and influential artists in China. His works have been used as official gifts to foreign government leaders by President Jiang Zemin. Liu also led official delegation to visit the U.S.A., Japan and Spain.

Mr. Liu is now Vice President of the China Artist Association as well as Director of the Fine Arts Department at the PLA Academy of Arts plus numerous other Chinese Art Societies.