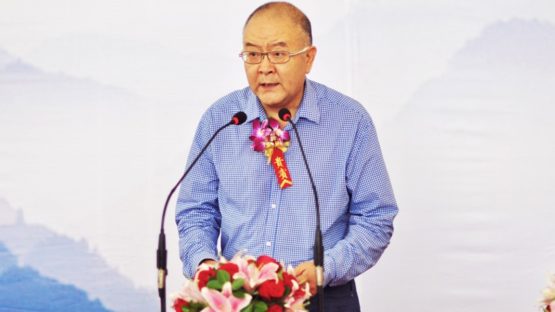 Long Rui is a Chinese artist who turned away from traditional landscape subjects, and experimented with abstract composition developing so his own oeuvre of landscape painting with expressive brushwork and fresh color washes.

He is a native of Chengdu City in Sichuan Province. Long graduated from Beijing Arts and Crafts School in 1966, and entered the Landscape Painting Postgraduate Class at the Department of Traditional Chinese Painting of China Central Academy of Fine Arts, where he studied under renowned painter Li Keran, who taught him the importance of sketching from nature and various techniques. All of his learning laid a solid foundation for lifetime achievements in artistic creation.

As head of the China National Academy of Painting, one of the nation’s highest-level fine arts research institutes, Long occupies a specially important position in the world of Chinese art. His extraordinary achievements and enlightening ideas, especially in the field of landscape painting, have heavily influenced modern Chinese painting.

He traveled to Europe and America to survey work and experience exhibitions. Such travels inspired his exploration of the art theories of renowned Western artists such as Paul Cezanne and Pablo Picasso. Later, he developed a new genre called “constructive landscape painting,” with which he managed to shake off limits of landscape sketching so he could boldly explore new techniques. His work won wide recognition and acclaim. However, after further research in recent years, he concluded that “constructive landscape painting cannot perfectly agree with traditional Chinese brush and ink, because it lacks internal connotations and a lasting aftertaste.”

Since the early 1990s, his artistic style has gradually evolved due to the influence of the cultural trend of “returning to tradition.” During the period, Long inherited and disseminated the spirit of painter Huang Binhong’s traditional scholarly painting, for which he drew great attention from critical circles and landscape painters.

Stating that some Chinese painters cast away tradition but seek so-called “innovation” through simply introducing Western elements, Long calls for “returning to the origin and staying close to traditional culture.” He believes that traditional Chinese painting should respect its essential rules and draw inspiration from traditional culture, thus realizing modernization and innovation in terms of artistic language.

Along with his deepening understanding of traditional Chinese painting, Long has begun to examine cultural values and philosophy hidden behind forms. He believes that painting is a carrier of national culture and an embodiment of a nation’s cultural values, and it cannot exist in a vacuum without national culture. For this reason, in the process of exploring the expressive language of traditional Chinese painting, he has committed to seeking possible conversions between philosophy and art and between natural and cultural elements. His landscape work pays attention not only to outward form and structure, but also to the purity of artistic language. More importantly, he injects his deep understanding of Chinese culture into his work, creating a majestic, meaningful flavor.

Long is an inclusive person. He continues seeking innovation while preserving tradition, creating an individual style. His landscape painting integrates various elements that intermingle with each other in traditional Chinese culture, such as literature, art, and philosophy, thus generating a lasting impression.