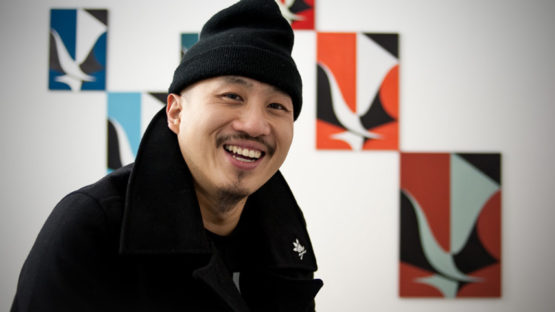 Madsaki is a Japanese artist whose aesthetic sensibility oscillates between the different cultural influences that have shaped him. His style can range from bright and cartoony, to hard and abstract.

Born in Osaka in 1974, raised in New Jersey, and schooled in New York City, Madsaki’s prolific career began when he traveled to the American south with the Barnstormers – an influential artist collective. Madsaki eventually returned to Japan, where he went on to become one of the most successful artists and designers in the country.

Madsaki graduated from Parsons School of Design in New York. Since the beginning of his career as an artist, Madsaki has shown us numerous styles ranging from extremely detailed drawings to large scale sculptures and installations. Recently his style underwent dramatic change where provocative words and phrases now play a center role. Despite of this change, Madsaki continuously observes the society and everyday life from a distinct perspective, reinterprets and reconstructs the extracted essences into his own work.

He has published how-to’s in the style of a tourist guidebook for correctly using bitch and fuck, collaborated with notable Japanese Designer Jun Takahashi, designed textiles with KAWS, and made a hybrid instrument out of an African kalimba and an electric metal guitar.

As many artists have done in the past with phrases and words, what Madsaki portrays through his works cannot be categorized as a simple ‘slander’, but is a form of ‘reconfigured phrases’ easily surpassing the symbolic meanings of the original words to satirize and banter the society we live in, while arising many questions. His ‘phrases’, at times roughly written, question the viewers if what they see should be taken for granted, or if it is something that should be deeply interpreted. Even further the viewers are pushed to the point where they have to depend on their sense of values if what they are facing is even a work of ‘art’ or not. Through his works Madsaki challenges and stirs the stereotype values of various systems we encounter in daily life.

In addition to his artwork, Madsaki has worked on countless collaborations, designing shoes, bicycles, skis, eyewear, apparels, concept shops, and pretty much everything else you can think of. He’s teamed up Disney, Adidas Originals, and the influential fashion designer of Undercover, Jun Takahashi.

This blurred image is only for you to be able to identify the artwork. If you want to discover artworks from Madsaki, go to this page. 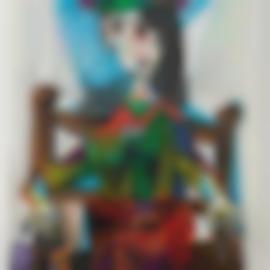 This blurred image is only for you to be able to identify the artwork. If you want to discover artworks from Madsaki, go to this page.