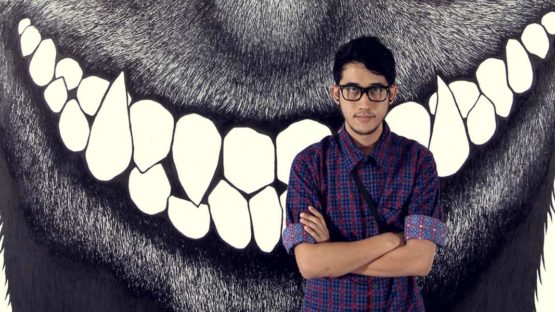 Pharuephon ‘’Tum’’ Mukdasanit also known as “Mamafaka” was a Thai graphic designer and street artist and is best known for one of the most recognizable characters of Thai pop art: ‘MR.HELLYEAH!’ a hairy, one-eyed monster with a mustache.

Mamafaka was born and raised in Khon Kaen. After finishing a vocational course, he joined Rangsit University, taking up graphic design ‘where he fell in love with art’, according to the Bangkok Post. In 2002, during his course at Rangsit University, Mamafaka met Rukkit Kuanhawate, another graphics designer, and gathered five other design friends to establish a design group called ‘B.O.R.E.D’. As a result, most Thai graphic designers know him as ‘’Mamafaka B.O.R.E.D”. The group was involved in many events, from the Fat Festival to Tiger Translate, and was influential to street art and pop-cultural enthusiasts in Bangkok, and is still going strong in the graphic industry in Thailand.

Mamafaka in the world of Advertizing

He started career life at Ogilvy&Mather in 2004, then Creative juice in Bangkok as Graphic designer on the following year,
He won award during his advertising career such as B.A.D award, Adsman, Adfest etc. However his advertising career was only but a brief one. Throughout his career, Mamafaka has been involved in several projects, including: Tiger Beer’s ‘Tiger translate festival’, Bangkok design festival, and a fixed gear event called ‘Ride A Life’. Mamafaka became a freelance designer in 2011, specializing on graphics design, street art and illustration. He then created the fictional character ‘’MR.HELLYEAH!’’. The success of MR.HELLYEAH! proved that he would soon launch his own line of product. Mamfaka was on high demand, working with well-known brands: Converse, VANS, K-Swiss, Billabong, Preduce Skateboard, CE Toys, M150, ISUZU, Smirnoff, V.O.X, YAMAHA, and TIGER BEER. In addition, throughout his career, he was still actively creating fine arts for galleries and exhibitions through Bangkok.

Largely based on black and white one-eyed hairy character, his work reflects MAMAFAKA’s remarkably good taste in art, design, and, well, sense of artistic humor. MAMAFAKA can be relied upon to bring attention whenever his work is on any product and his following spreads from Thailand to be heard by many brands.

While on holiday in Phuket, Mamfaka reportedly had a surfing accident in Kata beach on the Saturday morning of 7th of September 2013. While being unconscious, he was rescued by lifeguards and was rushed to Patong hospital, later on moving to Bangkok Hospital Phuket. After being in a coma for 48 hours, Mamfaka passed away on Monday, 9th of September 2013. The news was shocking to design and graphic circles all around Thailand. Mamfaka’s funeral was held at his birth province, Khon Kaen in the North-east of Thailand.