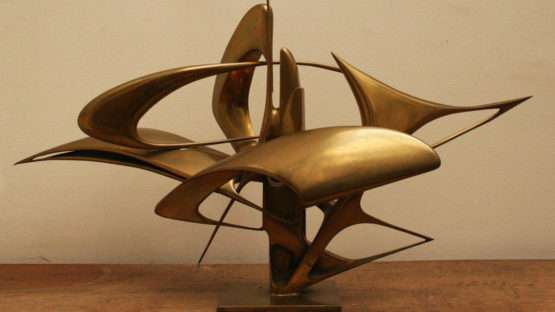 Marcel Arnould was born in Braine-Le-Comte (Belgium) on April 8, 1928 and died in Lennik-Saint-Quentin (Belgium) on August 20, 1974 is an abstract sculptor-painter of lyrical expressivity. Husband of Renée Demeester, painter, he was the friend of Marcel Marien, Marcel Lecomte, Achille Chavée, Jacques Lennep, Jean Coquelet and had joined the group Phases.
He has exhibited at the Galerie Saint-Laurent, the Galerie Les Contemporains, the Palais des Beaux-Arts, as well as in London, Rotterdam, Paris, Cologne, Madrid. His works can be found in the Royal Museums of Fine Arts, The Museum of Ixelles, Middelheim and in numerous public and private collections.