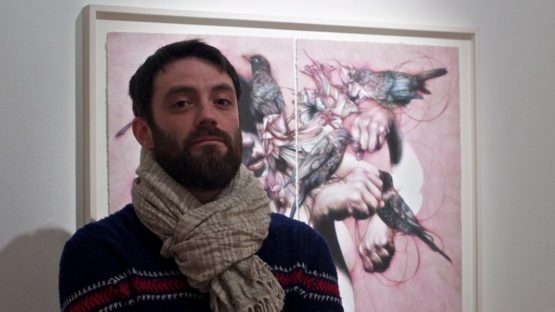 Working exclusively with colored pencils that help him deliver the highly detailed visual appearance he aims for, Marco Mazzoni is an Italian Milan-based artist who creates elaborate and remarkable drawings. In its core, his works depict the cycles of nature and worlds, oftentimes presented by flora and fauna that seem to be consuming or living on top of what may initially appear to be the primary subject of this artist’s drawings. Many pundits seem to be defining this man’s pieces as a certain category of portraiture – however, Marco Mazzoni consciously does not depict the eyes and it instead interested in other concepts and notions which are a lot more intricate than simply drawing someone’s portrait.

Visual Languages of Flora and Fauna

Marco Mazzoni was born on the 17th of January in the year of 1982 in Tortona, in the Province of Alessandria, Italy. His fascination for arts began when he was 14 years old and when he was asked by his friend to make the cover for a rock album. The young artist became interested in drawing whilst looking and taking cues from the album covers of Korn and Jack Off Jill. Mazzoni received a bachelor’s degree in painting from Brera Academy in Milan, a city that plays the role of Marco’s home to this day. Since then, Mazzoni was developing his style that relies heavily on depicting flora and fauna that consume varied living beings placed in the middle of the drawing. Well, consuming or peacefully living on their surface, depending on how you personally interpret Marco’s works.

Mazzoni works exclusively with colored pencils and this technique is what allows him to make such intricate drawings. Most of his pieces are defined by finely rendered female faces that are framed in butterfly wings, flowers and other vegetation found in the natural world. besides female figures, Mazzoni also depicts animals such as birds that are set within the absorbing plants. Marco’s pieces have been exhibited in galleries throughout Europe and the United States. The show that currently seems to be preoccupied the author is the exhibition in Thinkspace gallery scheduled for the March 2017. The solo show will be titled as Dear Collapse and it will be a true celebration of Mazzoni’s quality of detail, dense opacity and rich tonality.

The Completeness of Marco Mazzoni

Heavily inspired by the matriarchal culture of Sardinia and other lesser known aspects of Italian folklore, Marco Mazzoni’s pieces are a valid gem of the contemporary arts scene. His works are visually stunning, technically driven to perfection and psychologically devastating – in all these ways, Mazzoni has managed to reach the creative heights not many were able to successfully climb. When one considers all of the above, it makes perfect sense to call the work of Marco a complete form of arts, brought to its supremacy on all the main artistic fronts.

This artist is represented by Thinkspace Gallery.

Featured image: Marco Mazzoni – Photo of the artist – Image via pinterest.com
All images courtesy of the artist.