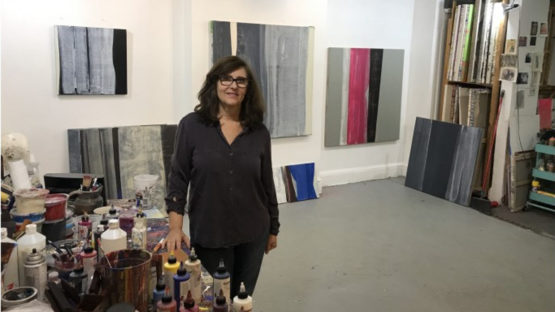 Marcy Rosenblat is an American abstract process painter who creates layered, colorful and complex paintings and prints. Born in Chicago, Illinois, Rosenblat earned her BFA from the Kansas City Art Institute in Kansas City, Missouri, in 1981, and her MFA from the Vermont College of Fine Arts in 2010. She received a grant from the Women’s Art Development Committee in 1998. She taught painting at Parsons School of Design from 1986 to 1989, and since 1995 has been an Adjunct Professor of Fine Arts at the Fashion Institute of Technology, New York, NY.

Rosenblat describes herself as having an affinity for process art, a method of art making in which predetermined systems and techniques largely determine the outcome of the work. The textured appearance of her paintings emanates from the intervention of common household products such as paper towels during the painting process. To begin each painting, she lays the canvas flat on a moveable easel then pours paint onto the surface. She then tilts the easel in predetermined ways, turning it then tilting it again, allowing the paint to drip down the surface. She then presses the paper towels or other textured products into the wet paint. The pressing leaves behind the imprint of the surface of the textured product, while simultaneously revealing the under layers of paint. It is a process of covering and revealing. Meanwhile, each successive layer of paint drips onto the sides of the canvas, so that in the end all colors used in the painting can be discovered on the periphery, even though some of them may have ultimately been obscured or removed from the surface.

Rosenblat is inspired by the idea of revelation and obfuscation—what we see versus what is hidden from us. She wants viewers to see her final product as a finished phenomenon, but also wants to offer them a chance to peek behind the curtain, so to speak. Each layer of paint is like a veil, through which viewers can see the inner workings of her craft. She is inspired by the idea that this will invite people to look more closely at things. Rosenblat is also inspired by the patterns she sees on ordinary surfaces, especially those not usually related to painting. That was the genesis of her choice to start using paper towels in her work, and in the same vein she often photographs the surfaces of the ground, the street, and objects she sees in the store then uses those photographs to create textures and patterns that will serve as layers of color in her paintings and prints.

Like the person trying to see something through a curtain I continue to paint until I find clarity through the painting. I…use a household pattern like the pattern of a paper towel, as a structural device to suggest the layer between viewer and object. The pattern is just familiar enough not to get looked at directly and the pictorial illusion it creates causes another kind of blurring or obscuring…I want my paintings to exist at the point where the viewer has just enough clarity to want to see a little bit more.

Marcy Rosenblat has exhibited extensively, especially in and around New York City. Selected exhibitions include Fordham University, Galerie Berlin am Meer, The Rawls Museum, and the Nelson Atkins Museum of Art. Her work has also been featured on Hyperallergic.

Featured image: Marcy Rosenblat in her studio
All images courtesy of the artist and IdeelArt