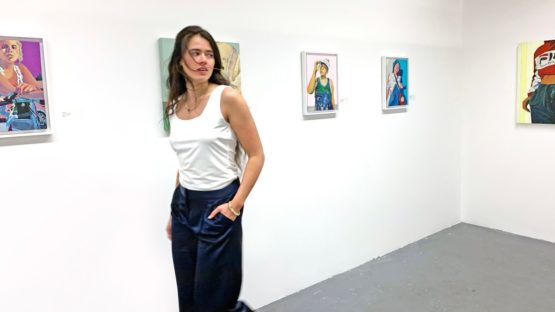 Marisa Rheem is an Oakland-based painter whose vividly contemporary work evinces an arresting clarity. Rheem captures zoomed-in glimpses of street fashion, women in paint-splattered overalls, and slick manicures with curiosity and reverence, translating them into masterfully wrought, uncannily animated compositions. With her remarkable precision and hypnotic, dazzling use of color, Rheem occurs as an artist who intuitively understands that the act of painting is equal parts restraint and joy. The emphasis is not on perfectionism, but rather on honesty, which translates into snapshot-like vignettes that feel timeless, despite their contemporary edge.

After taking a four-year hiatus from the studio, Rheem now approaches art-making with renewed vigor, and sees her current practice as one of growth and discovery, remarking, “I’m watching this new style reveal itself.” Rheem demonstrates a keen understanding of the importance of personal style, and her mesmerizing work ultimately feels like a celebration of that which makes us unique.

From fanny packs to Ritz Crackers, Rheem’s chosen subject matter challenges our understanding of the “everyday”: deceptively simple subjects become contagiously fascinating, conveyed in brilliant, often contrasting layers of acrylic paint. Truncated views of manicured nails, set among graphic black and yellow, for instance, don’t deny us of an entire scene, but heightens the drama and intrigue by singling in on a particular area, a select view toward which the artist directs us.

Subjects are self-possessed and simultaneously utterly approachable, leaning against sun-soaked walls or wearing paint-splattered overalls. Rheem’s colors and brightness inject levity and may initially occur as cheery, but the overall sense is one of bold independence and composed, steadfast individuality.

As intricately configured as her paintings are, Rheem eschews stark realism in favor of a more nuanced approach. With her technicolor palette and contemporary subjects, one might assume Rheem has a devil-may-care sensibility. Indeed, a passing glance of her current body of work yields an almost giddy response, with their eye-catching patterns and cropped or zoomed-in formatting. Rheem addresses this juxtaposition of play and poise with an ingenious ability to paint in a way that is as inviting as it is commanding.

Thankfully it’s a process of discovery that’s as vivid for the artist as it is for her viewers. Where street fashion, and its depiction, might come across as removed or pretentious from another painter’s brush, Rheem makes us feel a dizzying intrigue, encouraging a connection between artist and viewer that’s intrinsically cool, but indelibly approachable.

Marisa Rheem was born in 1989 in Washington D.C., USA. She currently lives in the Bay Area and works as an art consultant at a pop art gallery in the Financial District of San Francisco, CA. She received her BFA in Studio Art in 2014 from the Institute of American Indian Arts in Santa Fe, NM. Marisa has received multiple awards for her artwork, and has participated in numerous exhibitions, as well as in public and private collections. Marisa’s newest series, “Impermanent Fascination” is her first solo exhibition. The collection premiered in Oakland, CA, in early November, and will be traveling internationally to Tel Aviv, Israel in 2020.