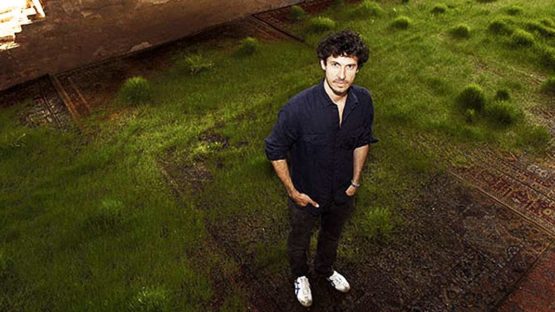 Martin Roth was an Austrian artist known for his strong relation to nature as his work is primarily concerned with it. Roth was as much caretaker as creator for his art, in which tufts of grass grow along the labyrinthine patterns of Persian rugs and his studio is transformed into an aviary for finches complete with trees for perching, all viewable through a peephole in the door.

Born in the Austrian countryside in 1977, Roth moved to New York at 19, and eventually graduated with an MFA from Hunter College at the end of 2012.

His installations and renegade interventions, like releasing a goldfish in the Chinese garden court of the Metropolitan Museum of Art or living with sheep as an “artist’s retreat,” are reactions against our relationship to the natural world that has been supplanted by an idea of nature. During a 2010 open studio event, he raised baby ducklings to allegorically explore how in his studio he “nurtures good ideas until they become art works” (and how at an open studio event he “often felt like an animal in the zoo”). However, he saw his real studio as the parks of New York, especially the Olmsted & Vaux-designed Central Park, which he stated is “like walking in an image of nature.”

This state of in-between is central to his Persian rugs on which grass grows “on the ‘dust of history’.” They were inspired by philosopher Michel Foucault’s examination of “heterotopias,” spaces that both exist and do not exist. Since the designs of carpets were first patterned after gardens, Foucault wrote that “the garden is a rug onto which the whole world comes to enact its symbolic perfection, and the rug is a sort of garden that can move across space.” Roth’s mobile rug installation has traveled to New York, Mexico, and a medieval castle in Graz, Austria for a May 2012 solo exhibition with Reinisch Contemporary. For that show, entitled “Second Nature,” Roth also flooded the floor of Reinisch’s gallery space and released 30 fish to swim through the water while life went on as normal around them. (Roth did say that he bought the gallery attendants rain boots.)

Martin Roth died of unknown causes in New York. He was 41 years old.