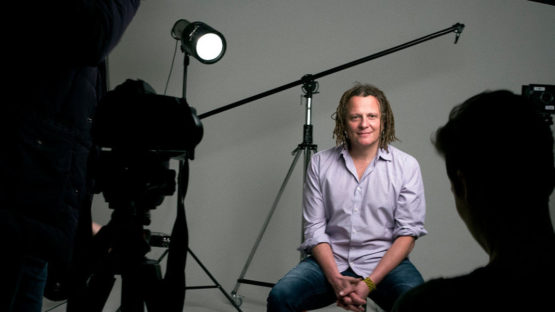 A rebel, widely known and appreciated for overthrowing the conventional interpretation of the portrait photography genre, Martin Schoeller is a German photographer who gives the viewers new perspective on the protagonists. Perfectly able to work with both famous and regular people, he applies much fun and dark humor, never undermining the persona or humanity of his objects. The rich details in the large-sized close up portraits expose the normality and approachability of the protagonists while the classic black and white prints show the beauty and humanity. Considered as one of the best celebrity photographers, Schoeller has also pursued his own sense of art, creating several capturing and stunning series.

Born in Munich, Schoeller finished high school without knowing what he wanted to do in life. Since education was free in Germany, he enrolled in college. Even so, he rarely attended classes and worked instead as a carer for an older man who had multiple sclerosis. At night, he was a bartender and a waiter. Then a friend of his proposed that they both apply to photography school in Berlin, and after completing various assignments, Schoeller got in. His friend did not. After completing photography school, he assisted a still life photographer in Frankfurt before moving to Hamburg and working for a very famous photographer. However, overwhelmed by the situation where the workload and responsibility were incredible, the artist was fired after only three months. “What I took away from that was since assisting is so much work for so little money, you need to work for someone you respect and would like to be like one day. My three favorite photographers at the time were Annie Leibovitz, Steven Meisel, and Irving Penn.”[1] Having saved some cash, he moved to New York and called them all up. As nothing happened, he soon ran out of money, returned to Germany and once again began working for the handicapped man. Several months later, he went back to New York, but his time found a job working for free for a month for a still life photographer. He knew someone in Leibovitz’s studio, and after sending countless applications, someone over there told Schoeller to come by and introduce himself. The next three years he worked for Leibovitz, first as a third assistant, but due to circumstances, he quickly became the first assistant.

When he was younger, photography wasn’t even considered as a possible vocation

Working for Annie was very intense, but Schoeller was able to learn a lot because she was giving him so much responsibility. More specifically, he was in charge of lighting – an element Annie is always quite peculiar about. After three years, he left the studio in pursuit of his own artistic path, but he always speaks fondly of his mentor, stating he probably wouldn’t have the career that he had without having worked for her. It wasn’t easy in the beginnings – he wasn’t even dreaming about working for the big magazines, as they wouldn’t hire a young and inexperienced photographer. Even the name of his mentor didn’t help much. Many were simply interested in finding out what was like working for Annie. Slowly, he began making a name for himself, and his employer’s names were getting bigger. In 1999, he joined Richard Avedon as a contributing portrait photographer to The New Yorker. Schoeller was always drawn to close up portraits, because, no matter what the circumstances are, he would walk away satisfied, having captured a picture that was simple, straightforward and most importantly, honest. They are the most essential, the most valid photographs – it’s all about the person and not about their clothes, environment, background, or even their social status. His goal is to capture the in-between moments, when his subjects aren’t taking on any trained expressions, but rather when they are raw and un-expecting – the moments when they forget they are being photographed.[2] The hyper-detailed close ups mark the reinvention of the portraiture.

As for the series, Close Up was the very first (it’s ongoing, as it is a concept as much as it’s a series). Since 1996 and the birth of his solo career, Schoeller began working on it, capturing intimate and honest images of the famous and regular people alike. His celebrity work has been featured in magazines such as W, Esquire, Rolling Stone, and Entertainment Weekly. Numerous artists, politicians, actors, and musicians have posed for him – Michael Douglas, Meryl Streep, Hillary Clinton, Barack Obama, Robert De Niro, George Clooney, Jeff Koons, and many others. The idea for Female Bodybuilders[3] came from his assistant. Schoeller, not familiar with the topic and wondering why would a woman even try to look more like a man, went to a body building competition and spoke with some of the participants. He quickly realized that many of them were mothers with kids and full-time jobs, and the artist felt very intrigued. For five years, he traveled the country, seeking these women and their stories at different competitions. The Twins[4] were an assignment for National Geographic, which issued an issue on the topic of twins and hired him to photograph them. The idea of photographing two people (so eerily similar) separately and not together as one entity became more and more fascinating. Everybody seemed so intrigued by these twins, and after the assignment was done, the artist continued the work. He found two sets of twins where one of them had a sex change operation, and identical quadruplets, which is extremely rare.

The photographs are simple, straightforward, and honest

As with other photographers, Schoeller’s series reach their culmination in a form of a book. So far, there have been several featuring portraits, including Portraits, Close Up, and a self-titled one. The Female Body Builders and The Twins also have their own respective books. In 2014, the artist had one of his most memorable solo exhibitions. Titled simply Portraits and held at Hasted Kraeutler in New York, the show allowed a glimpse into a special part of the artist’s body of work that has been never exhibited before. Tony Hawk with a skateboard on his kitchen counter, Steve Carell’s face covered in Scotch tape or a beautiful, windblown Cate Blanchett – all of them presented direct and real. The show, in all of its brilliance, was another confirmation of Martin Schoeller’s incomparable approach to the genre of contemporary portrait photography.