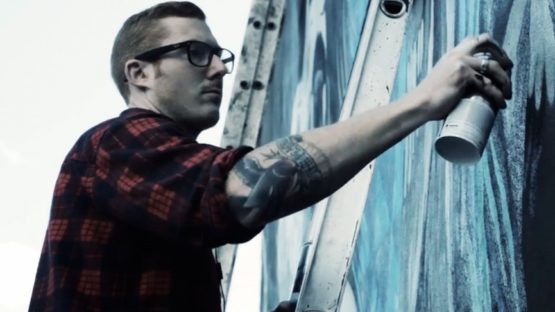 Growing up in the Eastern suburbs of Melbourne, David ‘Meggs’ Hooke, immersed himself in the worlds of drawing, cartoons, sci-fi films and skateboarding. In 2000 Meggs graduated from University with a Bachelor of Design and soon after became recognised for stencils and poster art on the streets of Melbourne. In 2004 Meggs became a founding member of the renowned ‘Everfresh Studio’ a unique collective of street artists known for large amounts of collaborative street work and aerosol murals.

In 2010 Meggs art directed and designed the ‘Everfresh:Blackbook’ a 254 page publication documenting the studios members, lifestyle and artworks from 2004-2010.The Everfresh Crew have more recently had collective artworks exhibited as part of ‘Space Invaders’ at the National Gallery of Australia in Canberra, as well as being the first artists to exhibit at the National Gallery of Victoria’s (NGV) new NGVStudio space at Federation Square in Melbourne. Thus confirming this uniques groups status as historically documented pioneering artists within Australia’s ‘graffiti & street-art’ culture.

Meggs’ artwork now fuses aspects of these early childhood influences with travel & cultural influences and self-referential experience. His fine-art painting style having evolved from more simplistic street based work to technical, layered and expressive mixed media artworks that are evolving to find the ideal balance between form and abstraction. Since entering gallery shows around 2004, Meggs has spread his street and gallery works nationally and internationally to cities such as London, San Francisco, Paris, Tokyo, Hawaii and Hong Kong as well as hosting solo exhibitions in Melbourne, Sydney, Hong Kong, London, Los Angeles & San Francisco. Meggs has works included in the permanent collections of the National Gallery of Australia and the Victoria & Albert Museum in London.

Consistently travelling to paint murals & exhibit in cities worldwide has allowed Meggs to collaborate with many artists of different cultures as well as brands such as Nike, Stussy, Addict, New Balance, Burton & Endeavor Snowboards to name a few. All of which has contributed to constantly evolving his talents and furthering his range of projects and ideas.

Meggs has recently been a key inclusion in the National Gallery of Australia’s (NGA), ‘Space Invaders – Australian street art’ retrospective; the ‘Everfresh Studio’ exhibition at the National Gallery of Victoria’s (NGV) NGVStudio space and ‘Young & Free – Contemporary Australian Street art’ at 941 Geary Street in San Francisco, 2011. Further cementing his position as one of Australia’s most progressive and committed street & contemporary artists. 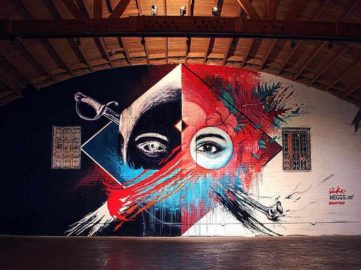