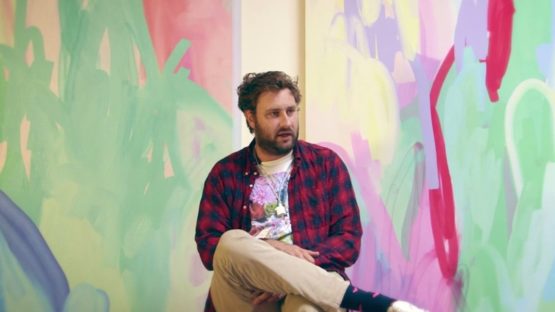 Michael Manning is an American artist based in California, known for his exploration of the capacities and limitations of software like Microsoft paint, which he uses to create Abstract-Expressionistic digital works.

Manning was born in 1985 in Corona del Mar, California. He got his BFA in Film at the New York University, mostly studying animation. In 2011, he got his MBA at the Rensselaer Polytechnic Institute.

Michael Manning is among the faction of young Internet artists interested in the already outdated functions and aesthetics of the early Internet, from the period around early 2000’s. Examples of his early works are Mirrroring.net, a series of outdated animations featuring iMac G3s, pizza, Satan, and Heidi Montag among other images. His most popular works are Microsoft Store Paintings and Phone Arts series, digital abstractions painted at locations of the retail chain named in the series’ title and on iPhones, using default devices and software.

A list of the things that Manning uses to make the paintings his Microsoft series would include his fingers, Fresh Paint – the default painting program in Windows 8, a Microsoft touchscreen computer, and the Microsoft store itself, since he’s never bought a device there to take home. With no studio and no gallery, not even a keyboard or a mouse, painting becomes a function of the tools provided by a major corporation and the user’s physical contact with them. Untitled beyond the indication of a device in the series name, the paintings have a sameness that partially masks Manning’s hand and highlights how software functions influence the movement of his fingers. And besides, the process of scrolling through the many paintings on Manning’s sites encourages the viewer to skim the visual content of any single work, to consider instead their common stylistic traits or the conditions of their making.

Recently, Manning is becoming well known for his large-scale paintings that start as JPEGs, and then are printed on canvas. These painting are brushed with an acrylic, giving them a clear texture on top. As the artist states, ‘it’s a hollow gesture to create the feeling of a hand, admitting that it feels nice to have that element.’

Michael Manning is currently based in Los Angeles, where he creates his digital works.