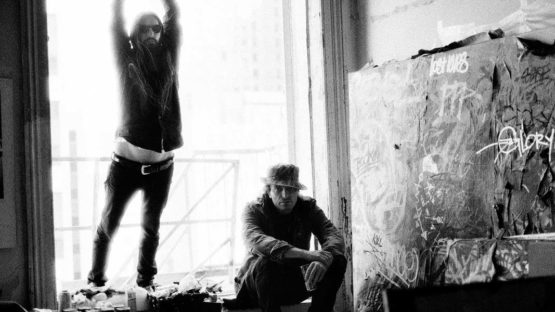 New York City based graffiti arists, Mint and Serf, create spray-painted canvases. Looking like a torn up mess, this is exactly how they want them. Their paintings explore graffiti reduced down to its most primal and weaponized form, raw and fearless, filled with a savage elegance and narcotic gleam.

Born in Moscow and Brooklyn respectively, Mint and Serf, a.k.a. The Mirf, are Mikhail Sokovikov and Jason Aaron Wall. The two met as teenagers in Bensonhurst, Brooklyn, where Serf was born and Mint moved with his family from Moscow in 1990. In years to come, the duo took to the streets of New York City, which has served as a canvas for their creative vision and work that transverses relationships between street art and civic spaces.

Mint and Serf are a visually dangerous anomaly in a scene dominated by artists who polish and objectify graffiti to make it pleasant for consumption. Their intuitive artwork challenges the tenuous relationship between graffiti and contemporary art. Mint and Serf’s paintings have been likened to sections of wall ripped from a seedy dive-bar bathroom or an abandoned property. There is an intense authenticity to this work, a gritty realness that is often missing from graffiti-based fine art. These layers of paint, ink and paper contain fragmented tags and phrases that are not merely gestures chosen for their decorative value. At their core these paintings are rooted in the action of graffiti, rather than simply the aesthetic.

For Mint and Serf the creative process is one of collaboration, occasionally involving other members of their crew, including the Peter Pan Posse or PPP. In these instances and for the perfect degree of sordidness, the canvases are worked over many late whisky-fueled night sessions in the studio, with successive layers building organically the way they would on the street. In other cases the artists wield a tight curatorial control over the creation process, combining just the right amount of torn paper and scrawl to create dark, powerful work that is more lyrical. ‘The moments that these canvases capture are really sporadic and very raw and aggressive,’ says Mint.

Though years of graffitiing have landed them in jail more times than they can count, their work suddenly became legitimate when they landed a corporate commission in 2003. That led to collaborations with suave brands including the Ace Hotel, Marc Jacobs, Soho House, and even the New York Yankees, but soon they became frustrated with the sleek designs these collaborations demanded. Mint and his often literally partner in crime Serf have continued to produce a vast range of artwork including large-scale murals, paintings, sculpture, photographs, graffiti and nightlife experiences. Mint and Serf have been featured in ARTFORUM, Artinfo, NYMag, The New York Post, Interview Magazine, Huffington Post, ARTNET, Dossier Journal, The DailyMail, Vice, Paper, ANIMAL, Complex, Mass Appeal, Gothamist and Blackbook. Their book Support, Therapy, and Instability was published in 2013 with essays by Carlo McCormick (Paper) and Cat Marnell (Vice / Elle).

The duo continues to live and create in New York.